The two leaders reviewed details of bilateral agreements, and on the eve of the meeting Rama said he expects that all bilateral problems with Greece will be resolved by springtime. 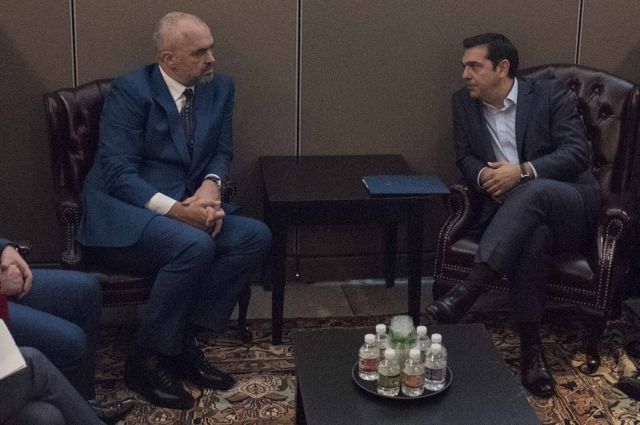 Albanian Prime Minister Edi Rama and Prime Minister Alexis Tsipras are discussing the next steps in bilateral relations at a meeting in Davos Switzerland today.

The two leaders are expected to review details of a number of bilateral agreements, and on the eve of the meeting Rama said he expects that all bilateral problems with Greece will be resolved by springtime.

The details of the bilateral agreements will be either incorporated in a legally binding text or will be agreed to in the framework of a strategic cooperation arrangement.

The talks are being held amidst a rise of nationalism against the Greek minority in Albania, which is expected to be on the agenda.

The latest expression of that was a move to demolish the seaside homes of ethnic Greek Albanian citizens in the popular resort town Himara, with authorities reportedly giving residents only five days notice.

On the other hand, there have been symbolic measures to improve relations, such as cooperation in exhuming and identifying the remains of Greek soldiers who fell during the Greek-Albanian war in 1940, and a move to grant Albanian citizenship to Archbishop Anastasios of Albania after a quarter century as primate of the Orthodox Church of Albania.

The bilateral talks also come amidst feverish efforts to resolve the naming issue with the Former Yugoslav Republic Macedonia, which has an Albanian minority that constitutes about 30 percent of the population. They constitute a majority in areas in the north and west of the country.

The small ethnic Albanian DPA (Movement for Reforms) party is the ruling coalition of Prime Minister Zoran Zaev, who needs their votes to maintain his parliamentary majority.