Today, the Prime Minister received Megaloeconomou in his office, and depicted the political transfer as an emerging alliance with centrist forces. 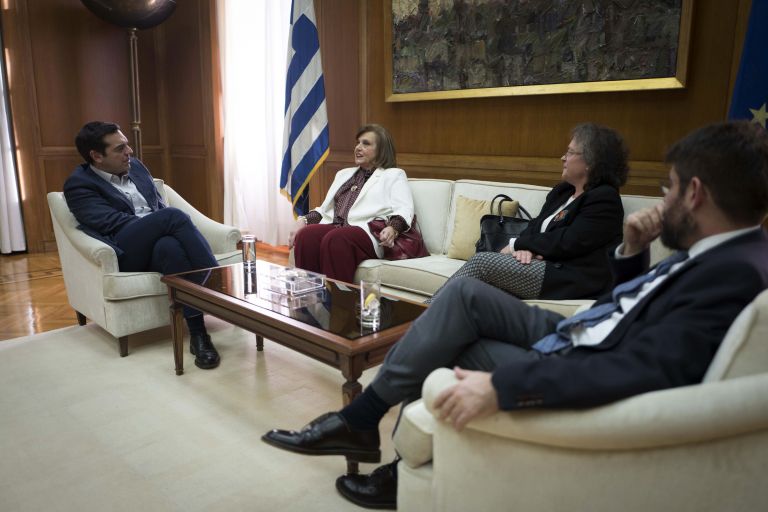 If there was one surprise in Monday’s parliamentary vote on an austerity omnibus law mandated by Greece’s creditors, it was that Prime Minister Alexis Tsipras added an extra MP to his parliamentary group, giving him 154 seats in the 300-seat legislature.

Theodora Megaloeconomou joined Syriza parliamentary group – but not the party – as a collaborating MP straight after the vote on Monday.

She had sent a letter to the prime minister requesting to join his parliamentary group, and he in turn informed Parliament Speaker Nikos Voutsis that he is inducting, effective immediately.

Megaloeconomou left Vasilis Leventis Centrists’ Union party last year, declaring herself independent but keeping the Piraeus district seat that she won on Leventis’ ticket, disgruntled over the fact that Leventis picked his adoptive son instead of her to be the party’s appointed deputy parliament speaker.

Leventis quickly accused Tsipras of a lack of political ethics, and declared that Megaloeconomou will get her comeuppance in the next general elections.

Today, the Prime Minister received Megaloeconomou in his office, and depicted the political transfer as an emerging alliance with centrist forces.

“The country is exiting the crisis with steady steps. It is positive that people who are centrists, who belong to the political centre, are mobilising in the battle to leave the crisis with society standing on its own feet. Meeting with Mrs. Theodora Megaloeconomou.”

With all recent opinion polls showing that the Centrists’ Union will not garner the three percent of the popular vote needed to enter parliament, many believe that other MPs from Leventis’ party may seek a political life vest by transferring to Syriza, and that, by all appearances, they will receive a warm welcome.