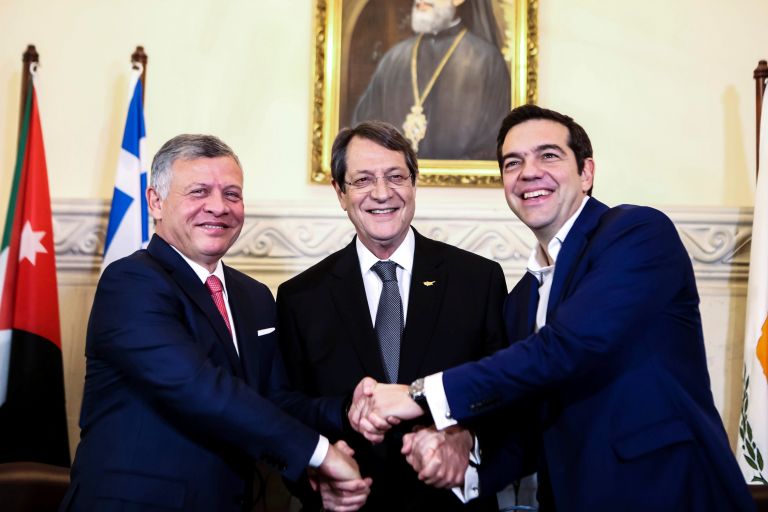 King Abdullah II of Jordan is joining Cyprus’ President Nikos Anastasiadis and Prime Minister Alexis Tsipras today for high-level talks and the signing of four bilateral Cyprus-Jordan accords and a trilateral memorandum of understanding regarding maritime affairs and antiquities.

A statement issued by the Jordanian Royal Court describes the first trilateral summit between the countries as a, “fundamental pillar for closer strategic cooperation between Jordan, Cyprus and Greece at different levels”. “Therefore it contributes to reinforcing joint action and serves the interests of citizens in these countries”, the statement said.

“We are here to inaugurate a very important trilateral cooperation with a very important regional country,’ Tsipras said in joint remarks with Anastasiadis at the presidential mansion in Nicosia, prior to the arrival of the Jordanian monarch.

“Jordan plays a decisive role in the Middle East, especially as regards security and the management of migrant flows.
“Our common strategy of establishing Greece and Cyprus as pillars of security, peace and cooperation in the region has produced concrete results, and we are plying forward to further upgrade our role and presence in the wider region,” Tsipras said.

The prime minister also expressed hopes that inter-communal talks on resolving the Cyprus problem can resume after the upcoming two rounds of presidential elections in the Republic of Cyprus, in which Anastasiadis is favoured to win, according to opinion polls.

For his part, the president of Cyprus also expressed his determination to broaden and deepen relations with regional countries.

“The King of Jordan will arrive shortly. I want to believe that just as we have built excellent ties with Egypt and have excellent prospects with Lebanon, so too we shall deepen ties with Jordan, with the aim of confronting the issues the region faces – the Middle East problem, the Syrian problem, the Cyprus problem, and combating terrorism,” Anastasiadis said.