Ahead of his virtual climate summit, Biden pressured by activists to act swiftly

Along with demands to end fossil fuel reliance, activist leaders unveiled an addition to the digital «climate clock» displayed on a building above the square since September. 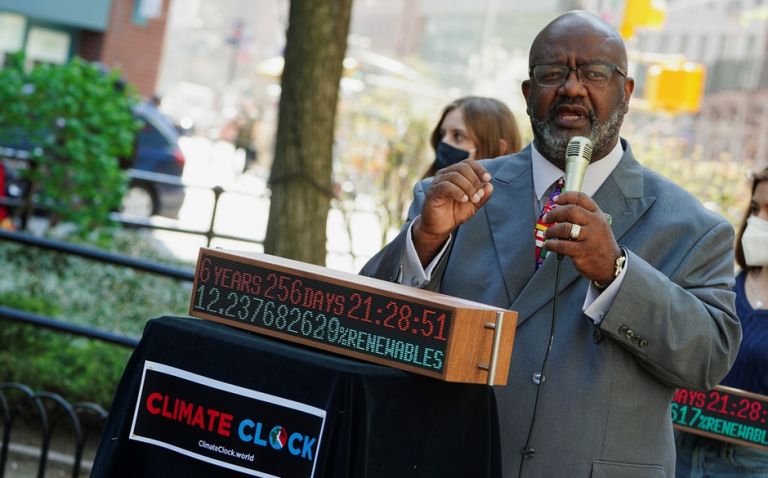 Climate activists rallied in New York’s Union Square on Monday with a message for the Biden administration: Time is running out, but it is not too late.

Along with demands to end fossil fuel reliance, activist leaders unveiled an addition to the digital «climate clock» displayed on a building above the square since September.

The clock now shows the amount of the world’s energy supplied from renewable sources, currently at 12% and slowly rising. A timer counts down the years, days and seconds that scientists estimate are left to reach net zero carbon emissions and avoid the most catastrophic effects of climate change.

«If we just have the deadline, that’s really focused on doomsday, and it can make people feel hopeless. People need to be reminded there’s so much they can do in terms of taking action,» said Alexandria Villasenor, a leader in the youth climate movement and one of several speakers at Monday’s event.

The event was part of a week of civic action aiming to pressure world leaders ahead of President Joe Biden’s virtual climate summit on 22-23 April.

Masked and outdoors, speakers shared stories of how their own communities had been hurt by climate-induced disasters.

After the event, Villasenor and her father began an electric car drive from New York to Washington to deliver a portable version of the climate clock to top Biden officials. Other handheld clocks will be given to campaigners and heads of state around the world. The thin, rectangular clocks are 2 feet (61 cm) long and display both lifeline and deadline numbers.

A similar countdown will be projected on Scotland’s Tolbooth Steeple, a landmark building in Glasgow. It will light up every night for the six months between Earth Day and the U.N. climate conference being held there in November.

The clocks are meant to remind people of «the limited time we have to fix this global problem,» said Jerome Ringo, goodwill ambassador for the Pan-African Parliament and former chairman of the National Wildlife Federation. Ringo plans to deliver portable clocks to leaders in Ghana, Nigeria and Burkina Faso.

Campaigners say they have been encouraged that upon taking office in January, Biden signed an order to rejoin the Paris Accord and revoked federal permits for the Keystone XL oil pipeline. Both actions were priorities for environmental activists.

«This is a huge issue for my generation,» said Xiye Bastida, another leader in the youth action movement. Bastida praised Biden’s focus on equality and environmental justice. «We want to bring this element of urgency, but we don’t want things done in an unjust way just for the sake of efficiency.»

But Bastida also urged even stronger action, and credited campaigners for progress made so far. «If Biden is the most environmentally friendly president, it’s because we pushed him there,» she said.

And “we are going to keep pushing,” she said. “This crisis is not something that is going to change if you ignore it.”