Mitsotakis sent a message to Turkey that the project will contribute to peace and geopolitical stability. 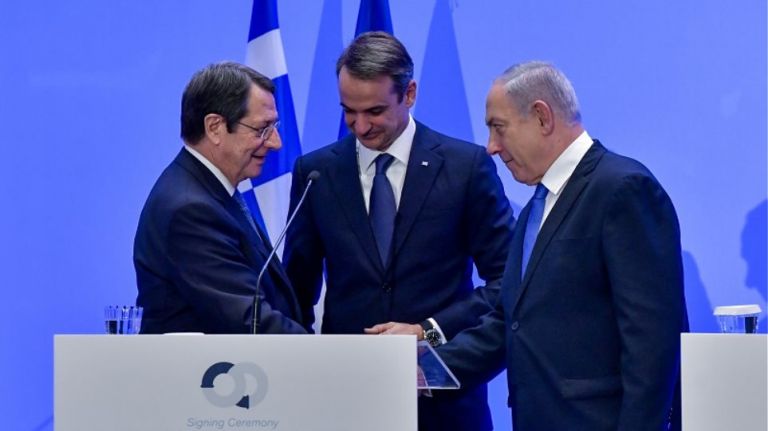 Prime Minister Kyriakos expressed great expectations after the signing of a trilateral agreement with Cyprus and Israel for the construction of the EastMed pipeline.

The PM described the agreement as the crowning achievement of the new geopolitical partnership with Cyprus and Israel, which creates new realities in the eastern Mediterranean.

The pipeline will have a length of about 19.0,00km and will bring gas to Greece and the rest of Europe via Cyprus and Crete.

At the same time Mitsotakis sent a message to Turkey that the project will contribute to peace and geopolitical stability.

The PM said the pipeline will constitute a new energy hub in the eastern Mediterranean which will contribute to the diversification of Europe’s energy sources.

Diversification is a key element in US and EU foreign policy.

“The new pipeline will increase the geopolitical weight and surplus value of Greece and Cyprus in the Mediterranean. It will also give strategic depth to our cooperation with Israel,” he said.

“One of the largest natural gas pipelines in the world will obviously have a positive impact on the countries which are participating, he noted.

Mitsotakis said the project will contribute to regional peace and geopolitical stability and that demonstrates the palpable determination of the three states to view the energy sector as a link of cooperation between peoples and not as an opportunity for disagreements and clashes.

Netanyahu said the EastMed pipeline project is a great development that puts Israel on the global energy map.