Editorial: They just remembered the arrogance of power

Even those in SYRIZA who now discern errors had completely accepted one-man rule and the transformation of a putatively left-wing party into one revolving around the leader. 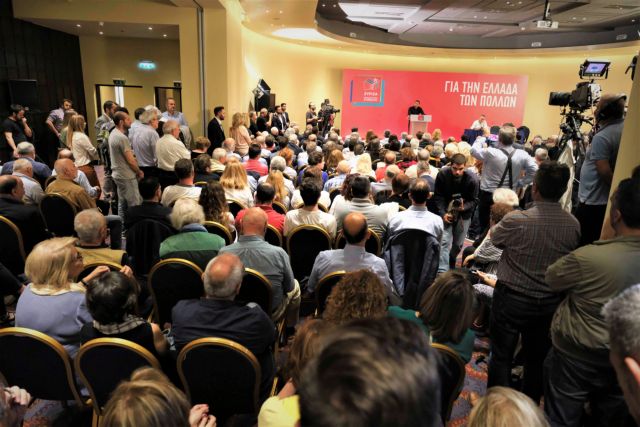 It was to be expected that the electoral trouncing of SYRIZA would revive the party’s old habit of backstabbing between comrades.

Things which certain cadres were whispering behind closed doors are now being said publicly.

As long as cadres found solace in the comforts and privileges of power they neither detected any arrogance nor did they speak about the clique in the PM’s office or about the crude behaviour of Alternate Health Minister Pavlos Polakis.

Unfortunately, criticism after the fact – as there is no indication of self-criticism – cannot persuade anyone or change SYRIZA’s image.

Even those who now discern errors had completely accepted one-man rule and the transformation of a putatively left-wing party into one revolving around the leader.

Because they cannot yet criticise PM Alexis Tsipras directly, they are targeting his closest associates as if they were making the decisions on their own.

SYRIZA’s European Parliament ticket reflected the type of party SYRIZA has become. The supposed moral advantage that the party claims it has is now represented by ex-tourism minister Elena Kountoura, actor Alexis Georgoulis, and Petros Kokkalis (son of the business mogul).

Mr. Tsipras’ much-touted efforts to forge a progressive alliance in the direction of Social Democracy ended up as a refuge for the remnants of the deep Pasok and various political carpetbaggers.

Similarly, they just realised that there is a problem with the demeanour of certain ministers and cadres and that “certain behaviours created a distance between citizens and the government”.

The slogans that one heard from SYRIZA over the past years – “It’s either us or them” and “Either we finish them off or they will finish us off” did not appear to have bothered anyone in the party.

All these years SYRIZA with Alexis Tsipras at the helm conducted politics with boundless cynicism and arrogance and incredible audacity.

They created divisions, rewarded undemocratic behaviours, used institutions as a means to serve their ends, and consciously adopted policies that they knew would decimate the middle class.

All these things that citizens realised but SYRIZA’s leadership refused to understand led to the party’s crushing defeat last Sunday.

Nonetheless, they stubbornly insist on the same narrative and debunked way of thinking and that is why they will pay the resulting price in the upcoming general election.