SYRIZA, which until recently led a coalition government with the far right Independent Greeks as the junior partner, just discovered the utility of a “progressive alliance”. 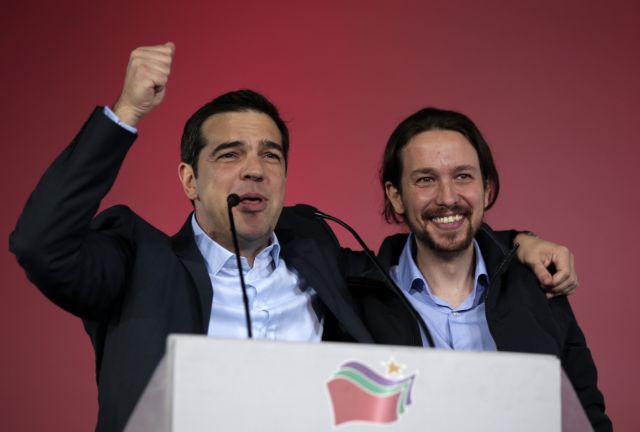 It is not the first time that an election in another country has been used to justify or serve domestic political motives in Greece.

Now the electoral victory of the socialists in Spain and the trouncing of the right-wing People’s Party are being exploited ahead of the upcoming electoral races in Greece – general, local, and European Parliament elections.

SYRIZA and it leader with their well known “flexibility” and reversals rushed to celebrate the victory of the Spanish Socialist Workers Party (PSOE) leader Pedro Sanchez as a confirmation of their policies.

They ignored the defeat of left-wing Podemos which PM Alexis Tsipras once tightly embraced and “discovered” their kinship with the Spanish socialists in order to justify their belated cooperation with the remnants of the old Pasok party in Greece.

SYRIZA, which until recently led a coalition government with the far right Independent Greeks as the junior partner, just discovered the utility of a “progressive alliance” in order to avert a crushing electoral defeat.

Unfortunately for Mr. Tsipras, anti-right and anti-neo-liberal policies are demonstrated in practice and not with grand rhetoric and costless pledges.

Pronunciamentos about progressive change in Europe and about stemming the rise of the extreme left are fine, but after four years in power Greeks are in a position to judge the degree to which the government’s words are matched by its deeds.

The government’s effort to forge alliances and seek governmental partners in order to be convincing cannot be undertaken at the last minute and after it has implemented policies that are the opposite of those advocated by the party they are courting.

Electoral results in another country do not allow us to draw conclusions about party balances in Greece.

If Mr. Tsipras wants to draw analogies, he should examine the decline of Spain’s left-wing Podemos party, which like SYRIZA emerged from the demonstrations in public squares of the indignados.

Progressive alliances and hegemony in the centre-left or Social Democracy cannot be built opportunistically with the fleeting objective of winning the next election.

These things require a sense of consequence and respect for ideas and history, and not divisive practices and constant efforts to attack and marginalise those whom one is courting, as SYRIZA has done until now.