When the PM himself has raised the banner of slander, dragging opponents through the mud, and character assassination, why should any minister hesitate to do the same and worse? 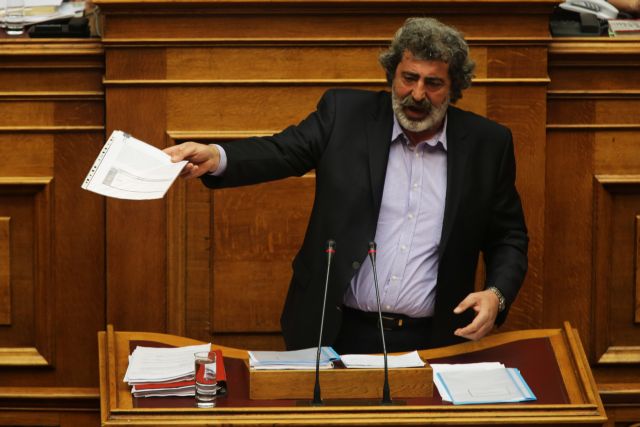 Mr. Tsipras’ beloved minister, Alternate Health Minister Pavlos Polakis, whom the PM has taken under his wing to provide cover for his unacceptable thuggery, has again exhibited his degeneracy.

The political immunity that he enjoys has made him so uncontrollable, prejudiced, and provocative that he has begun to scare even some of his own SYRIZA comrades.

Polakis’ audacity and his inhumane behaviour are such that he had no compunction about attacking a man who has achieved excellence in life with countless personal sacrifices – the disabled European Parliament candidate Stelios Kimbouropoulos (New Democracy).

With stubborn persistence, Kimbouropoulos distinguished himself and pursued what should be self-evident in a well-governed society – the right to equal opportunity, and not favours.

He had not, however, obtained the approval of armchair tough guy Polakis. This “gentleman” who in his capacity as minister should have done everything in his power to limit impact of inequalities that affect the disabled, instead of saluting Kimbouropoulos’ efforts came out and spewed bile and hatred against him.

Despite the general uproar over his attack on Kimbouropoulos – who simply said that the disabled want equal opportunity and not handouts – the minister did not have the guts to apologise and instead spewed non-sequiturs and excuses, as is his wont.

Polakis threatens, slanders, bullies and then hides behind a contemptible ministerial immunity.

The problem is neither this specific minister, nor the immunity and cover that Mr. Tsipras offers him.

The problem is the lost morality of a segment of the left which in order to cling to power for a bit longer adopts the most repulsive practices.

When the PM himself has raised the banner of slander, dragging opponents through the mud, and character assassination, why should any minister hesitate to do the same and worse?

The problem is not just the thuggish minister who is acrid (as the PM said to excuse him) and without any moral compunction. The problem is all those who offer him cover, justify his behaviour, offer him excuses, and keep him in his position.

In what other civilised country could a minister have spewed so much bile against so many and still remain in office?

Such things only happen in Greece – with a left-wing government that touts its “moral advantage”.