Upon landing in Agathonisi, Tsipras made a sharply worded statement about the incident, noting that Greece will do everything to defend even the remotest parts of it’s territory. 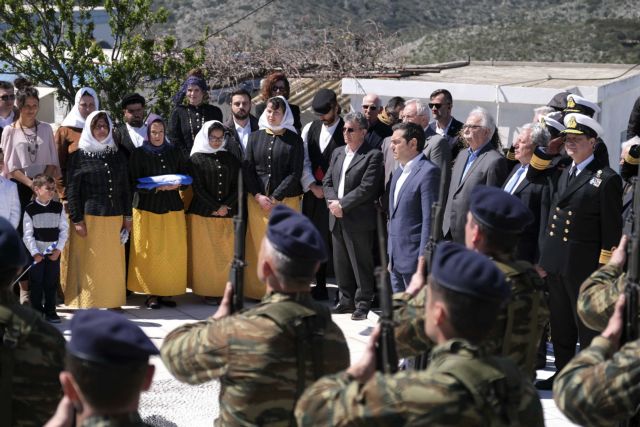 Greek foreign ministry sources said that the Greek side is not disposed to let the issue pass, even as Ankara declared publicly that the incident never occurred.

Turkey’s state-run Anadolu Press Agency cited unnamed sources which denied that the incident occurred and said that the Turkish pilots were just doing their job.

“Turkish jets were not involved in any harassment in the Aegean Sea, they were on their usual duties, security sources said on Monday,” Anadolu reported.

“The security sources, who spoke on condition of anonymity due to restrictions on speaking to the media, refuted the claims and said the Turkish jets did not attempt any harassment, instead, they were performing their usual duties.”
Athens underlines that the incident undermines above all the security of those involved but also Greek-Turkish relations in general.

Upon landing in Agathonisi, Tsipras made a sharply worded statement about the incident, noting that Greece will do everything to defend even the remotest parts of it’s territory, and that the Greek PM would swim there if he had to.
A pair of Turkish F-16s harassed the PM’s helicopter, forcing it to manoeuvre at a lower altitude as a pair of Greek war planes arrived and intercepted the Turkish planes.

“They forced the helicopter on which I was traveling to engage in low altitude manoeuvres. They should know that such foolish actions are pointless,” Tsipras said.

“What was the objective – to harass the helicopter of the Prime Minister? They should know that such foolish actions are pointless.They are wasting aviation fuel for no reason is my message to them, firstly because we are always there to defend our national territorial integrity and secondly because the Greek Prime Minister will visit the remotest island of our country even if he has to get there by swimming,” Tsipras declared.

“The message I want to send to everyone who is watching id that we extend a hand of dialogue and communication. However, if necessary we shall have to do what we know in our collective conscience. Our ancestors have taught us how to defend our rights and sovereignty,” the PM said.

A similar incident happened one year ago when Tsipras was traveling from the island of Kastelorizo to Rhodes and his Chinook helicopter was harassed by Turkish war planes.