It has been evident for some time that the productive model of Europe on which the social state of the post-war decades was built has not beΕn adapted to today’s era of globalisation. 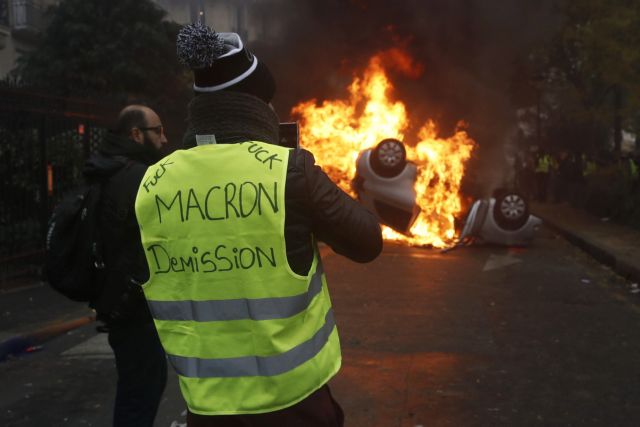 epa07206137 Cars burn as protesters wearing yellow vests (gilets jaunes) clash with riot police near the Arc de Triomphe as part of a demonstration over high fuel prices on the Champs Elysee in Paris, France, 01 December 2018 (issued on 03 December 2018). The so-called 'gilets jaunes' (yellow vests) protest movement, which reportedly has no political affiliation, is protesting across the nation over high fuel prices. According to reports, the damage left after the riots in Paris are estimated to exceed three to four million euro. EPA/YOAN VALAT

The uprising of the so-called yellow vests in France is yet another symptom of the political and social crisis that has bedeviled Europe for some time.

A relatively small hike in the price of fuel was enough to trigger a spontaneous and unguided movement of enraged citizens who find that they are unable to maintain a standard of living that until recently was a given.

It has been evident for some time that the productive model of Europe on which the social state of the post-war decades was built has not been adapted to today’s era of globalisation.

Jobs are being lost. Unemployment is rising. The bulk of the lower and middle income brackets find it ever more difficult to make ends meet.

That has resulted in social explosions, grandiose nationalist fantasies, and anti-immigration and xenophobic rhetoric.

All of these reactions fuel a delegitimisation of the political system. Parties that have ruled for decades see their popularity sinking. Extreme populist forces as well as organisations and movements without a clear political orientation are emerging. Classic left-right distinctions no longer move people, and the extreme right is finding ever more fertile ground for making its presence felt.

Even in Spain, where since the Franco dictatorship no extreme right organisation has appeared, the far right has managed to be represented in a local parliament, in an area that until now was dominated by the Left. All over Europe, an anti-politics stance and disdain for established political structures is constantly growing.

Obviously, the combined social and political crisis is not easy to manage. There are no easy solutions and difficulties are being aggravated as more and more politicians are beginning to seek populist prescriptions, which describe the problem but offer no solutions.

Strong political leaders such as those who were dominant in previous decades are nowhere to be seen, and the prevalence of new technologies and social networks in citizens’ everyday lives has dramatically altered the situation.

Clearly, Europe as a whole requires a new mixture of economic and social policies, with a deep reform of the productive base. However, it is not easy to achieve that and it is even more difficult for it to acquire social acceptance. It is equally obvious that leaders cannot ignore the burgeoning wave of protests, nor can they ignore the growing popular disdain for them.

It is time for courageous decisions, and not for constant discussions and compromises with no results.