Church of Greece wants renegotiation of Tsipras-Ieronymos deal from scratch

A stormy, Marathon meeting of the entire hierarchy (79 Metropolitan bishops) flatly rejected the Tsipras – Ieronymos plan to take priests and lay employees of the Church off the Civil Service rolls but to pay them the same salaries 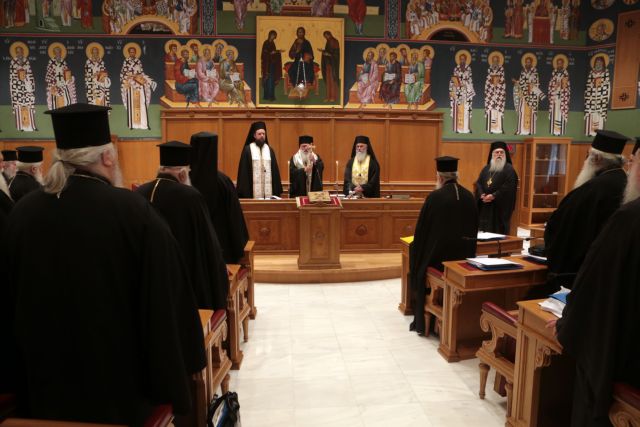 By all appearances, the 15-point agreement on Church-State relations presented by Prime Minister Alexis Tsipras and Greek Orthodox Archbishop Ieronymos of Athens and All Greece was destined to be a shooting star.

A stormy, Marathon meeting of the entire hierarchy (79 Metropolitan bishops) flatly rejected the Tsipras – Ieronymos plan to take priests and lay employees of the Church off the Civil Service rolls but to pay them the same salaries (total annual cost approximately 200mn euro) through a subsidy to be distributed by the local Metropolitan bishop. That automatically annuls job security provisions of the civil service.

Take it or leave it deal

However, the text of the agreement makes clear that it is a take it or leave it deal. The 15th and last point stipulates that nothing is agreed unless everything is agreed to.

Back to the drawing board
The Synod agreed to form a committee with clerics (including priests) and legal and economic advisors to make proposed changes. Effectively, the Holy Synod is proposing a re-negotiation from scratch.
The Prime Minister’s office, immediately after Metropolitan bishop Ierotheos of Nafpaktos held a press conference, announced that the government will go ahead and draft a law including the 15-point accord, and will deliver it to the Church’s expert committee.

The Holy Synod has essentially spoiled the PM’s declared objective of hiring 10,000 new civil servants, replacing the priests currently listed as civil servants, but who will not be on civil service loans under the terms of the agreement.
Ierotheos denied that Ieronymos retreated from the terms of his agreement. “There is no issue of retreat or of imposing something. The Archbishop’s role is to express the common denominator of all views for the good of the Church, and that is precisely what he did. There is a unanimous agreement on three points. The dialogue will continue on all the issues that are of interest to both the Church and the State.”

PM determined to ply ahead

The Holy Synod of the Hierarchy of the Church of Greece concluded unanimously to continue the State-Church dialogue on issues of common interest. Hence, the Greek government will immediately proceed to prepare a draft law in the framework of the Joint Announcement of 6 November, which constitutes an historic step towards the rationalisation of Church-State relations,” the PM’s office stated.

“In any event, the salary status of those who serve the Church constitutes the responsibility and decisions of the State,” the PM’s office said.

The draft law will be brought to the attention of the Special Committee of the Permanent Holy Synod, before it is tabled in parliament.