the Greek side is working on the sidelines to ensure at least the tolerance of those who disagree. That was the approach of Finance Minister Euclid Tsakalotos at meetings with IMF chief Christine Lagarde and Poul Thomsen, leaving European finance ministers to make the final decision. 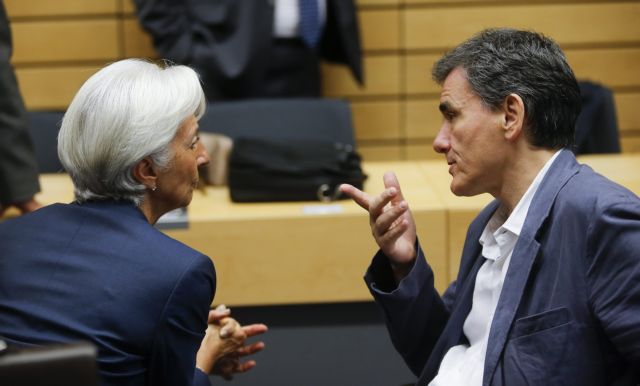 epa04843527 International Monetary Fund (IMF) Managing Director Christine Lagarde (L) and Greek Finance Minister Euclid Tsakalotos talk at the start of a special Eurogroup finance ministers meeting on the Greek crisis, at the European Council headquarters in Brussels, Belgium, 12 July 2015. Eurozone Finance Ministers set 12 July 2015 as the deadline to reach an agreement saving Greece from bankruptcy, amid warnings that failure to strike a deal by then could lead the country to crash out of the eurozone. EPA/OLIVIER HOSLET
Share

Tonight Alternate Finance Minister Yorgos Houliarakis will send the 2019 draft budget to Brussels, indirectly submitting the request to cancel planned pension cuts, as under one scenario the draft budget will not provide for them.

The updated plan also will provide for increasing the funding for housing subsidies to 200mn euros.
As regards pensions, the basic argument is that “the numbers stack up”. “Even without the cuts the 3.5 percent primary surplus target will be met in 2019 as well.”

Now that other eurozone countries are discovering their fiscal situation, “Greece will be the only European country with a balanced budget, if not with a surplus. That does not mean that the decision on pension cuts will not be political. The countries that may object, chiefly Germany, are able to insist that “the implementation of the Katrougalos law (that provides for pension cuts) constitutes a structural reform and has been agreed upon.”

In that framework, the Greek side is working on the sidelines to ensure at least the tolerance of those who disagree. That was the approach of Finance Minister Euclid Tsakalotos at meetings in Bali with IMF chief Christine Lagarde and Poul Thomsen, leaving European finance ministers to make the final decision.

1. The drafting of the report on the fiscal trends and the 2019 budget by the European Commission.

2. The discussions that will be held with the institutions and their head, Declan Costello, who are expected in Athens on 25 October.

3. Costello’s recommendation to the Eurogroup Working Group, and the comments and possible objections that will be raised at a meeting of deputy finance ministers at the end of October.

4. The 5 November Eurogroup meeting, where Greece expects the green light to draft the final budget without pension cuts, so that it may then be tabled in the Greek Parliament. Greece will have yet another opportunity to broach the issue at the December Eurogroup, but that will be if there are objections or even a “veto”, with a decision that rejects the Greek government’s request. In this effort, one ally is the European Commission, as Commissioner Pierre Moscovici has said that a “government can implement a social policy decision if the number stack up”.