Their unconditional release was ordered by a Turkish court, but there have been feverish diplomatic efforts in the last five-and-a-half months – with the EU, Nato, the US and other allies – by the Greek government to pressure Ankara for their release. 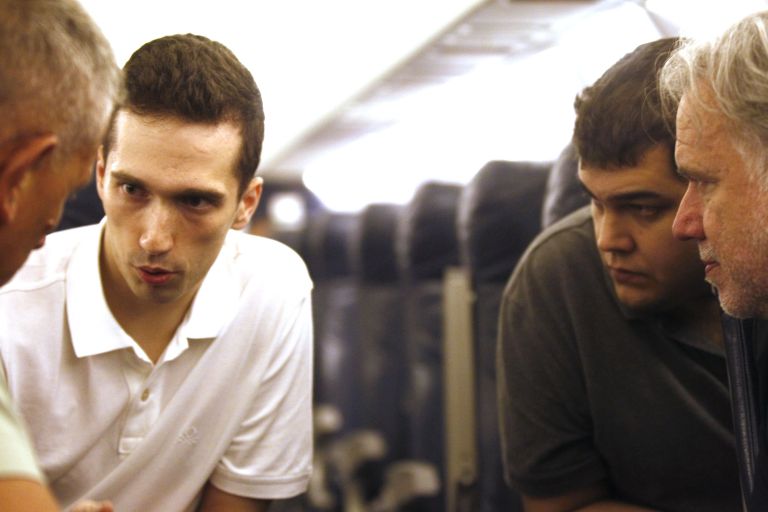 Share
After a 167-day ordeal of imprisonment in a maximum security prison in Edirne, Turkey, with no charges having been filed against them, Greek army officers Angelos Mitretodis and Dimitris Kouklatzis landed in Greece before dawn today.
Their unconditional release was ordered by a Turkish court, but there have been feverish diplomatic efforts in the last five-and-a-half months – with the EU, Nato, the US and other allies – by the Greek government to pressure Ankara for their release.
Prime Minister Alexis Tsipras had also discussed the issue at a recent meeting with Turkish President Recep Tayyp Erdogan.
The two officers were captured on 1 March, when during a patrol at the Greek-Turkish border they entered a few dozen yards into Turkish territory, due to weather conditions and low visibility.
After the court decision was made public yesterday – it was featured prominently by the Turkish state-run news agency Anadolu – Greek authorities.
Turkish court’s decision
On 14 August, the court in Edirne examined the two officers’ latest petition to be released, and decided to release them pending trial. There were no conditions attached to their release, and therefore they were allowed to return to Greece.
It will not be mandatory that they be present at the trial.
At yesterday’s hearing, the two officers reiterated that they entered Turkish territory by mistake.
The prosecutor stated that the jail time already served by the two officers is not less than the prison term imposed for illegal entry into a military area.
The court decided that there is no evidence to support espionage charges.
Hence, taking into account the length of their incarceration, the two officers were set free.
They will be tried in absentia with the charge of illegal entry into a forbidden military area.
However, the Turkish president’s diplomatic advisor assured his Greek counterpart that the two officers will be tried in absentia and that if a penalty is imposed it will not exceed the prison time already served by the officers, the state-run Athens News Agency reported.

Katrougalos on the return flight posted a photograph of the two men on Twitter, along with a lengthy message.

Ο «μυστικός» διάλογος Μητσοτάκη – Στουρνάρα για την οικονομία
“Shortly we will be in Thessaloniki. A great joy, a great success. It is the result of systematic diplomatic efforts of the state and political forces, with the wishes of all Greeks. New prospects of bolstering friendship, good neighbourly relations, and stability in the region, Katrougalos wrote.
The aircraft arrived at about 3:30am arrived at the Thessaloniki International Airport ‘Makedonia, where they were welcomed by their parents, Defence Minister Panos Kammenos, and Deputy Foreign Minister Yannis Amanatidis, as well as a military honour guard.
Mitredotis and Kouklatzis arrived in Thessaloniki dressed in military uniform, where they were embraced by their parents, in an especially emotional moment for all of Greece.
They saluted the honour guard, and then appeared before the defence minister.

Angelos Mitretodis thanked everyone, especially those who supported them, but made no further remarks.

The officer’s were taken to Thessaloniki’s 424 Military Hospital, where they will be examined.
Kammenos’ statements
The defence minister spoke to the officers by telephone shortly before they boarded the PM’s aircraft.
In his public statements, Kammenos said that the Greek people displayed unity and patriotism.
“On behalf of the prime minister we welcome them, and hope that this signals a new day for Greek-Turkish relations. We can live in peace and with respect for international law and international treaties,” he said.
“I want to send a message of unity. I hope that their being freed on this landmark day, will signal a new day in Greek-Turkish relations. I welcome the two officers, congratulate them because they honoured their oath, did not hand over the flag, served in conditions in which they were held hostage, and returned in order to continue to serve the fatherland,” Kammenos said.

For his part, Katrougalos said that the prime minister congratulated the two officers for their stance. He said that the effort to secure their release was unifying, and that “other other political forces contributed.
He said the release puts Greek-Turkish relations on a new footing.