The Prime Minister Alexis Tsipras received the chief of Gazprom Alexey Miller in Athens on Tuesday, in order to discuss a… 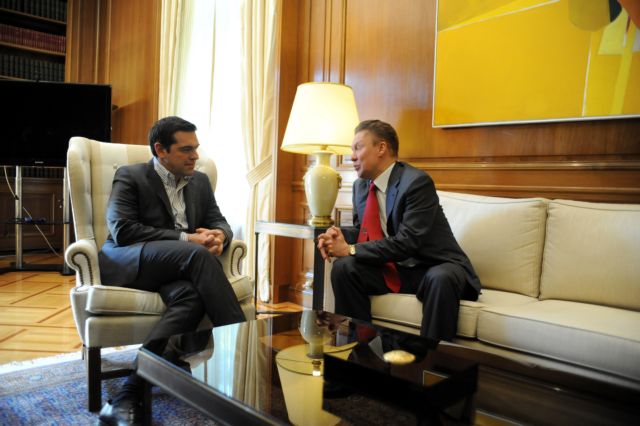 The Prime Minister Alexis Tsipras received the chief of Gazprom Alexey Miller in Athens on Tuesday, in order to discuss a number of energy matters, including the proposed Turkish Stream natural gas pipeline. Early, Mr. Miller met with the Minister of Productive Reconstruction, Environment and Energy Panagiotis Lafazanis.

According to the Greek government, it was agreed to form a working group for the construction of the Greek pipeline, along with a venture company, which will mostly see European participation. The government has expressed its support for the ambitious project. Contrary to rumors from the Energy Ministry of a “memorandum of understanding” or “road map” for the construction of the pipeline, no such agreement has been signed.

This was confirmed in a statement by Mr. Lafazanis, who is expected to have further contacts and meetings with the Russian side. The Minister asserted that the talks with the Gazprom chief were “constructive and very substantial” and highlighted how the government’s intention is to promote bilateral relations and ties between Greece and Russia. Nevertheless, the lack of an agreement refutes rumors that circulated last week, suggesting that Gazprom was to make an advance payment of 5 billion euros on future profits from the pipeline.

When asked about the stance of the European Union on the matter, Mr. Lafazanis expressed his estimation that the EU would support the project, as the goal is for it to be compliant with the European framework. The Minister cited the other TAP pipeline, which will start in Azerbaijan and end in Italy, which the EU has approved and argued there was no excuse to not approve the Turkish Stream pipeline. The European Commission was aware of Tuesday’s meetings in Athens, but declined to comment, until there is an agreement between Greece and the Russian energy giant.