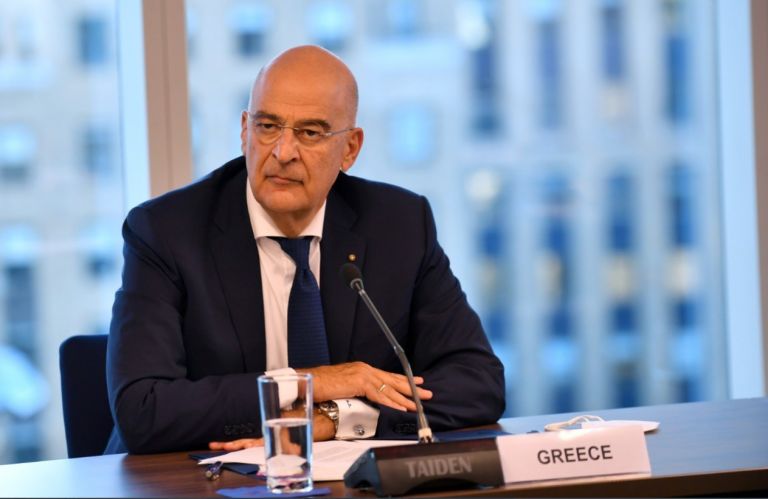 In a nearly 1,700 word letter, dated 25 May, to UN Secretary General Antonio Guterres, Greece’s ambassador to the UN, Maria Theofili, fully deconstructs with a host of citations of international law Turkey’s contention that Greece does not have the right to maintain defensive arms on a number of its Aegean islands, and that Greek sovereignty over those islands is contingent upon their demilitarisation.

“Greece solemnly calls upon Turkey to stop questioning ‹Greece’s sovereignty over its .Aegean islands, in particular through legally baseless and historically false assertions, to abstain from threatening Greece with war in case it extends its territorial waters beyond the present width of 6 n.m., in full contravention of Article 2, paragraph 4 of the UN Charter, and to refrain from illegal activities in violation of Greece’s sovereignty and sovereign rights in the Aegean and Eastern Mediterranean. Such practices by Turkey, in addition to betraying adherence to a revisionist mentality totally disconnected from the basic principles governing relations between States, as reflected in the UN Charter, pose a serious threat to peace and stability in the broader region,” the letter states in summation.

The letter states that it is a response to Turkey’s UN Ambassador Feridun Sinirlioğlu’s 30 September letter to Guterres, and it is unclear why it took Athens eight months to build its legal arguments and lay them out before the UN chief.

Previously, the Turkish envoy had made related arguments in a 13 July, 2021 letter to Guterres, which was followed by a 27 July letter from the Greek ambassador.

Though Ankara has for decades challenged Greece’s right to arm its islands based on provisions in the Lausanne Treaty, which Greece insists that Turkey misconstrues, its contention that demilitarisation is a necessary condition for Greek sovereignty over those islands is much more recent, entirely unfounded legally, and poses a major threat to regional peace.

It is an integral component of Turkish President Recep Tayyip Erdogan’s neo-Ottoman, expansionist and revisionist stance toward Greece, which lays claim to large swathes of Greece’s territorial waters and maritime zones, and which now includes a thinly veiled territorial expansionism.

What is certain is that yesterday’s letter comes after a barrage of flights over inhabited Greek islands of the Aegean in recent weeks, and that Ankara is making moves at sea that represent a direct challenge to Greece’s sovereign rights over its islands.

That includes sending the small Turkish research vessel “Yunus” to sail yesterday and today in waters between the islands of Agios Efstratios, Limnos, Chios, and Lesvos.

In his letters, the Turkish envoy had articulated Ankara’s newfangled claim that “Greece’s sovereignty over the islands in the Eastern Aegean] was and remains dependent upon demilitarisation”.

“Turkey’s two letters represent a new development in relation to the alleged differences which Turkey claims to exist between Greece and Turkey concerning the Aegean and the Eastern Mediterranean. Turkey’s position is tantamount to calling into question Greece’s sovereignty over the islands, islets and rocks in the Aegean which was definitely attributed to Greece by the Lausanne Peace Treaty of 1923 and the Paris Peace Treaty of 1947. This contention is clearly in breach of the letter and the spirit of these Peace Treaties, whose main objective was to establish permanent boundaries and territorial legal titles to the States concerned, without conditioning them on any other obligations, and these new Turkish claims seriously undermine regional peace and stability,” Theofili stated, noting that finality is inherent in treaties establishing boundaries.

In his letter of 30 September 2021, Turkey’s UN envoy seems to imply again, as in his letter dated 13 July, 2021, that, because Greece has allegedly violated the demilitarisation provisions of the above-mentioned treaties, it is not entitled to rely on its territorial legal titles to the Aegean islands in the process of a maritime delimitation.

Theofili highlights the fact that allegations of a violation of a putative demilitarisation requirement aim to vastly limit Greece’s maritime zones in the context of a prospective delimitation of the two countries’ exclusive economic zones (EEZs), which may in the future be referred to the International Court of Justice at The Hague (ICJ), where Ankara would naturally raise its sovereignty challenges.

In her letter, the Greek envoy stresses that “all of the above Greek islands have the right to a territorial sea, an exclusive economic zone and a continental shelf in accordance with article 121 (2) of the UNCLOS [UN Convention on the Law of the Sea, to which Turkey is not a signatory]. Therefore, as the sovereignty of Greece over the said islands is legally undisputed, their entitlement to maritime zones and their effect on maritime delimitation has no connection whatsoever with the issue of their demilitarisation under the said Peace Treaties.”

Ankara in 1936: no demilitarisation for Lemnos, Samothrace

The letter states that the 1936 Montreux Convention, regarding the regime of the Dardanelles, abrogated the 1923 Lausanne Convention, inter alia regarding the demilitarisation provisions concerning Lemnos and Samothrace.

Theofili underlines that then Turkish Minister of Foreign Affairs Tevfik Rüştü Aras, a towering div in the history of Turkish foreign policy, told the Turkish Grand National Assembly in Ankara, on 31 July 1936, during debate on ratification of the Montreux Convention, that Greece is under no obligation to keep the Greek islands of Lemnos and Samothrace demilitarised.

She cites ICJ jurisprudence to argue that Greece’s unilateral arming of the islands under international law “may produce binding legal effects” and that “the aforementioned Turkish declarations [by Aras] constitute a legally binding commitment of Turkey”.

“Greece has explained time and again the errors and fallacies in Turkey’s arguments regarding the above issues. Greece has done so both bilaterally and in various international fora, including the United Nations. Turkey, nevertheless, persists in presenting such untenable positions allegedly anchored in international law in order to serve its own political purposes. The fact that Turkey ‘…urges other States Parties to the said treaties to invite Greece to comply with the provisions of those treaties’, once again confirms Turkey’s persistent practice of raising issues lacking any legal basis, a practice that adds to the instability that this country causes by its actions,” the Greek envoy states.

Theofili underlined the direct threat to the sovereignty of Greece’s Aegean islands posed both by Ankara’s unsubstantiated claims and its large military buildup, as well as its continuing threat of war.

“Furthermore, it must be recalled that Turkey has in recent years increased to worrying proportions its military arsenal, a big part of which is positioned opposite the Greek islands in an offensive posture. Moreover, Turkey has not hesitated to make serious and solemn threats of the use of armed force against Greece (casus belli), including in a resolution adopter on June 8, 1995 by the Turkish National Assembly.”

“These statements on the use of force are coupled with harassment of Greek naval units and scientific research vessels licensed by Greece in disregard of the safety of seafarers, as well as with highly threatening acts by Turkey, including repeated overflights of Greek territory by fighter jets in contravention to international law. In this respect it should also be noted that article 13 of the Lausanne Treaty expressly provides that ‘with a view to ensuring the maintenance of peace… the Turkish Government will forbid their military aircraft to fly over the said [Mytilene, Chios, Samos and Ikaria] islands’,” the letter stresses.

Calling upon Turkey to negotiate in good faith

Though Turkey has a long list of claims that it wants to negotiate with Greece, many far beyond the limits of international law or of what any Greek government would be willing to discuss, Greece’s ambassador calls on Ankara to negotiate in a spirit of good neighbourly relations the only difference that Athens to date officially recognises.

.
“Lastly, Greece continues to firmly believe that the two countries can resolve their outstanding difference, namely the delimitation of their continental shelves and exclusive economic zones, in a spirit of good-neighbourly relations and in accordance with international law. Greece calls upon Turkey to also commit to the peaceful settlement of this difference.”