Biden thanks Mitsotakis for supporting Ukraine, says US-Greece ties ‘more important than ever’

‘We have much to discuss today on our ongoing support for Ukraine, our deepening defense and trade partnerships, energy security, climate change, and so much more.’ 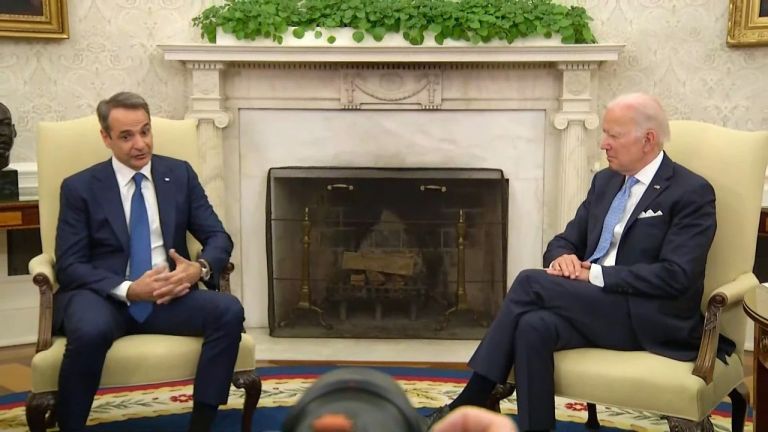 In receiving Prime Minister Kyriakos Mitsotakis in the oval office this evening (Greek time) US President Joe Biden in brief on-camera remarks thanked the Greek PM for his leadership in palpably supporting Ukraine, which he recognised was not easy and declared that US-Greece relations are at their best level ever.

Main opposition SYRIZA had slammed the government’s decision to send arms to Ukraine,

«I want to thank you, Mr. Prime Minister, for Greeks’ moral leadership here. It’s not easy, I know. But thank you,» Biden said.

«We have much to discuss today on our ongoing support for Ukraine, our deepening defense and trade partnerships, energy security, climate change, and so much more. Today, the friendship and partnership between our countries is, I think, more important than ever. And I’m honored to celebrate that partnership with you because you’ve been a good friend,» he noted, outlining the agenda of the talks.

Mitsotakis: US, Greece can do more together on energy security, trade investment

Mitsotakis said that Greece and the US have, as in Ukraine, always stood together “on the right side of history”.

«Over the past two centuries, our two countries have always been on the right side of history. We fought in wars together. And, of course, we are now facing, united, the challenge of Russia’s invasion into Ukraine,» he said of the Russian invasion of Ukraine.

«At the same time, this visit is an opportunity to reassess the status of our relationship. I honestly believe it is at an all-time high. And I’m not just speaking about the defense component of the relationship, but I’m also speaking about trade investment — Greece’s role as a reliable partner in the eastern Mediterranean, as a country that overcame the financial crisis with a booming economy, and as a pillar of stability both in the Balkans and in the broader region. So, when we talk about issues such as energy security, there’s so much more we can — we can do together,» Mitsotakis said.