Gurdeniz was among the 104 former admirals that co-signed a letter blasting the Turkish president for his intention to withdraw from the 1936 Montreux Convention. 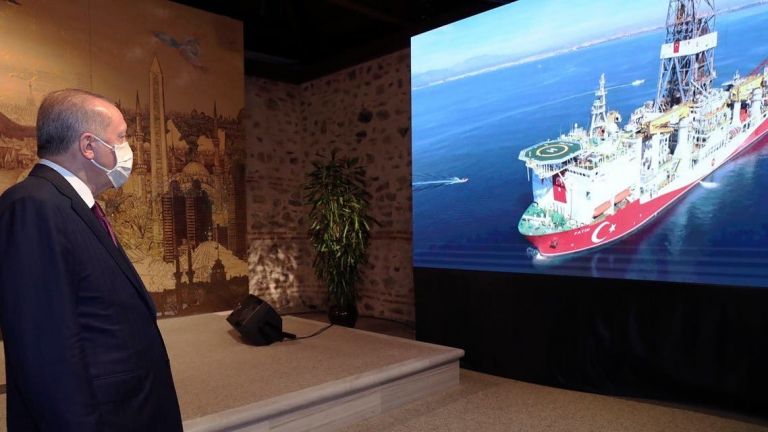 The originator of the “Blue Motherland” theory, which claims for Turkey huge swathes of Greek maritime zones in the Aegean and the Mediterranean and their hydrocarbons deposits, has lambasted the recent Greece-France mutual defence pact.

Retired Admiral Cem Gurdeniz’s theory was fully embraced by Turkish President Recep Tayyip Erdogan as it dovetailed with his expansionist, neo-Ottoman geopolitical outlook, but that did not prevent Erdogan from having him detained for a week in April, 2021.

The practical application of the Blue Motherland theory is evident Turkey’s ongoing military challenges toward Greece and Cyprus in the Mediterranean.

Falling out with Erdogan

Gurdeniz was among the 104 former admirals that co-signed a letter blasting the Turkish president for his intention to withdraw from the 1936 Montreux Convention – which establishes the international status of the Turkish Straits (Dardanelles) – and demanding that Erdogan not veer away from Kemalist secularism. The former top Navy officials had heightened concerns about Erdogan packing the armed forces with Islamists.

He was among the ten former admirals who were detained for having organised the declaration, which the government likened to Turkey’s past military coups.

Though he fell into disfavour, Gurdeniz’s theory lives on in Erdogan’s rhetoric, and in an interview with Greek Open television he blasted France for siding with Greece in the defence of areas that Ankara considers part of the Blue Motherland.

He maintained that France is behaving like a bully toward Turkey whereas, as he said, it should be acting as a mediator.

Regarding the mutual defence clause in the Greece-France strategic partnership agreement, Gurdeniz maintained that regional problems cannot be resolved militarily.

“Everyone understands that this procurement of [French Belharra] frigates went forward in order to balance the operational forces [of Greece with those] of the Turkish Navy. Why should two NATO members need an agreement for one to protect the other?” Gurdeniz asked, referring to Greece and France.

In fact, NATO since the 1974 Turkish invasion and occupation of Cyprus NATO has maintained a policy of equal distances between Greece and Turkey, even when international law is clearly on Athens’ side.

Moreover, the EU’s mutual defence clause in the Treaty on European Union is a dead letter in the absence of a European army and no one believes that any other member state would come to Greece’s defence.

“These issues in the Eastern Mediterranean cannot be resolved through military confrontation. It would be better for France to act as a mediator. France over the last two years has been behaving as a bully toward Turkey. This is unacceptable. Turkey is not a small country. It is a regional power,” Gurdeniz declared.

Regarding Greece’s position that one reason that it is forging other alliances is the fact that it is the only NATO member-state that another member of the Alliance has threatened with war (in the event that Greece would exercise its right under international law to extend it territorial waters from six to 12nm), Gurdeniz suggested that Greece has misinterpreted the Turkish Parliament’s June, 1995, declaration of the casus belli.

Top Turkish government officials, however, have over the last years reiterated the casus belli several times.

In January, 2021, just days before a round of Greek-Turkish talks, Turkish Foreign Minister Mevlut Cavusoglu stated that, ““The decision taken by the Turkish parliament has not changed.”