The last, best hope for the Greek economy according to most analyst is the disbursal of Athens’ share of the EU Pandemic recovery fund, which amounts 32.1bn euros, 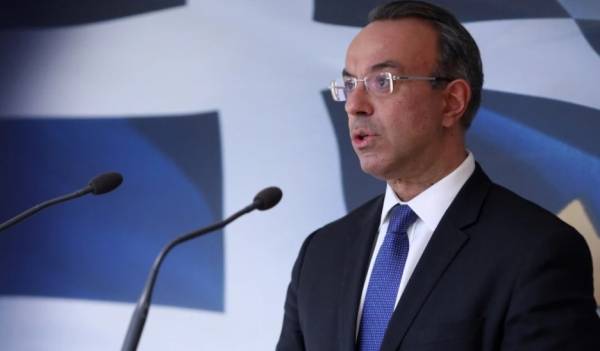 With the government struggling to manage the disastrous economic impact of the COVID-19 pandemic, Finance Minister Christos Staikouras presented “five axes” of the government’s reform programme during an online Economist Conference entitled «200 Years of Economic Survival», a reference to this year’s bicentennial of the start of Greece’s War of Independence.

In a schematic presentation that offered few details, Staikouras outline the government’s aim of building a new productive model, implementing a balanced fiscal policy, further upgrading the quality of institutions, and shaping an environment of national unity and self-confidence.

The paramount but most intractable problem that the government faces is how to fashion a new production model that can help the floundering Greek economy recover even as the government struggles with propping it up with huge subsidies – an estimated 20bn euros in 2020 – to address the huge economic repercussions of the pandemic, not least of which is galloping unemployment.

The last, best hope for the Greek economy according to most analyst is the disbursal of Athens’ share of the EU Pandemic recovery fund, which amounts 32.1bn euros, with a down payment of about four billion euros.

That is contingent upon European Commission approval of the plan submitted by the government.

It provides that all investments and reforms must be completed by the end of 2026, that private funding for strategic investments be maximised, and that investments must be coupled with reforms.

The five axes of the government’s plan in order of importance, as presented by Staikouras at the Economist Conference, are as follows:

“The economic crises that our country has gone through [in two centuries of independence] have emphatically highlighted the weaknesses of the current production model. For protracted periods it failed to rely on the strong pillars of productivity and competitiveness, and instead it displayed a tendency towards consumption, excessive borrowing and lack of sound foreign investment,” the minister said.

“The main goal of the current government from the beginning of its term has been to transform the Greek economy by adopting a new, modern, extroverted, competitive, resilient, green, digital and socially just development model, increasing total production, exports and investments – mainly through the use of modern technologies, the dissemination and application of knowledge, and bolstering from a contemporary perspective education, training, lifelong learning, research and innovation.”

“The exercise of prudent and balanced fiscal policies is vital for the healthy development of the country, without increasing the debt at the expense of future generations. The current government is following this economic strategy from the very beginning,” the finance minister underlined.

“Even during the period of the public health crisis, when it was deemed necessary to change the plan and implement expansionary policies, we took advantage of the fiscal flexibility offered by the EU to member-states due to the pandemic while avoiding fiscal derailment.”

Staikouras noted that a huge bureaucracy, clientelism and a highly dysfunctional state bureaucracy have hampered economic growth and investment for many decades.

“Great progress has been made during the term of this government in the areas of improving the functioning of institutions and the efficiency of public administration, as well as in tackling tax evasion and avoidance and taking advantage of the potential of new technologies.”

Populism, discord and the quest for unity

“Discord and the prevalence of populism as the criterion for important decisions proved to be a fatal mistakes which led to national division and economic collapse. Without their toxicity and enormous intensity, and without the occasional prevalence of the [mythological] Sirens of demagoguery, Greece would certainly have made even greater achievements,” he said

He stressed that reform of the educational system will be a top priority – guided by the fundamental principles and values of Greek culture and national identity – and will strengthen the sense of national unity.

Finally, Staikouras underlined the critical importance of Greece confidently staking out its place and role in the EU and the global geopolitical order.

“Greece must play a leading role in the task of completing the European project and in shaping the global new era that lies before us. With pride and confidence we are advancing coherent proposals for achieving European solidarity, prosperity and equality,” he concluded.