The highest ranking foreign leader to visit was Prime Minister Mikhail Mishustin of Russia, which played a decisive role with its forces alongside those of Britain and France in the tide-turning naval Battle of Navarino 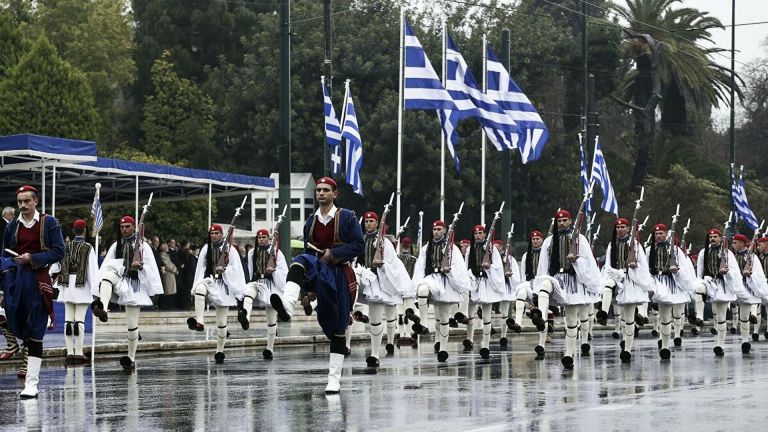 The crowds that each year celebrate the 25 March anniversary of the start of the Greek War of Independence from the Ottoman Empire were absent at the military parade in Syntagma Square outside of Parliament, with public expressions of patriotism and national pride limited to coverage of the event on television and other media due to the raging COVID-19 epidemic that has claimed the lives of 7,600 citizens.

Yet the momentous occasion was marked in cities around the world, mainly those with a strong Greek diaspora element, by the lighting of major public building, bridges, and other sites with the blue and white colours of the Greek flag.

The Greek Revolution has been seen by historians – and honoured in a flood of congratulatory messages from foreign leaders over the last few days – as a classic David and Goliath struggle in which a small and poor but brave and courageous nation fought with unprecedented courage against a strong empire and against the tide in a reactionary period of European history exemplified by Metternich.

Aside from the annual parade – held in a period of pronounced Greek-Turkish tensions and marshaled despite the pandemic as a symbol of Greek resolve in defending national sovereignty at any cost – the sole official event at the level of state and government was a state dinner for foreign dignitaries and Greek political party and military leaders held by President Katerina Sakellaropoulou (a former president of the Council of State, the country’s supreme administrative court, who looked to the late US Supreme Court Justice Ruth Bader Ginsburg as a role model) at the presidential mansion.

US President Joe Biden in a videotaped congratulatory message underlined the deep influence of ancient Athenian democracy on the founding fathers of America, who in their wisdom viewed it as a model.

The Greek president underlined the seminal role of some of the great powers of the time – Great Britain, Russia, and France – in defeating the Ottomans and of the great philhellenes of the time from the realm of poetry (most notably the great Romantic poet Lord Byron who gave his life in the struggle), literature, and painting (with Eugène Delacroix’s masterpiece Massacre at Chios being perhaps the premier example.

“The philhellenic wave [in Europe] offered constant material and moral support. Great intellectual divs and artists sang the praises of the uprising of the Greeks and decisively influenced public opinion in Europe and America. That shaped a philhellenic awareness of the fact that the liberation of our country constituted a major event at both the geopolitical and state levels,” she said.

A number of foreign leaders were not able to attend the event in part because of the raging pandemic – most notably French President Emmanuel Macron who like other leaders offered a taped message, but also granted a full length interview to French-Greek journalist Nicos Aliagas for ERT Greek state television in which he underlined that the EU is well able to handle any provocation by Turkey.

Greece and France over the last year have been steadily deepening their military cooperation, not least in the area of military procurement, and France expressed palpable support for Greece during last summer’s military provocations by Turkey in the eastern Mediterranean.

In a symbolic and emotional gesture, the Louvre offered on loan to the Greek Parliament a fine tapestry copy of the Italian Renaissance painter Raphael’s Vatican fresco (1509-1511) School of Athens, a sweeping tribute to the contributions of ancient Greece to Western Civilisation, with Plato and Aristotle front-and-centre.

The highest ranking foreign leader to attend the state dinner was Prime Minister Mikhail Mishustin of Russia, whose country played a decisive role with its forces alongside those of Britain and France in the critical, tide-turning naval Battle of Navarino, on 20 October, 1827.

“This year we will celebrate a landmark event, 200 years since the Greek people started a war for independence, which resulted in the long desired freedom from the Ottoman Empire. Russia made a substantial contribution to this. We also helped each other throughout various difficult times in history. Russian seamen took part in the international peacekeeping mission on Crete. Our men and officers fought on the Macedonian (Salonika) front during WWI. During WWII, they fought against the Nazi occupiers side by side with the Greek resistance fighters,” Mishustin noted in his remarks,”

“Relations between Russia and Greece go back still further. They developed over many centuries ago and are rooted in the age of the Byzantine Eastern Orthodox faith [from which first Kievan Rus received the Eastern Orthodox faith]. Our peoples share a common history and common cultural and spiritual values, as well as deep sympathy, of course. The upcoming Russian-Greek Cross Year of History will give our people an opportunity to learn more about each other,” he said.

It was the presence of Prince Charles and the Duchess of Cornwall, however, that most caught the public eye due to his and the royal family’s deep and longstanding ties to Greece and his own deep affection for Eastern Orthodox spirituality, as evidenced by his many visits to the 1,000-year old monastic colony of Mount Athos.

His father, Prince Philip, was born in Greece, his paternal grandfather was Prince Andrew of Greece and Denmark, and his grandmother, Princess Alice of Greece, became a Greek Orthodox nun and spent her final years in Buckingham Palace.

“My wife and I could not be more delighted to be back in Greece, which has long held the most special place in my heart. After all, Greece is the land of my grandfather; and of my father’s birth, nearly one hundred years ago, in the centenary year of Greek Independence. Later, it was in Athens that my dear grandmother, Princess Alice, during the dark years of Nazi occupation, sheltered a Jewish family – an act for which in Israel she is counted as «Righteous among the Nations.”

“In feeling a profound connection to Greece – her landscapes, her history and her culture – I am hardly alone: there is something of her essence in us all. As the wellspring of Western civilization, Greece’s spirit runs through our societies and our democracies. Without her, our laws, our art, our way of life, would never have flourished as they have,” he concluded.