Tsiodras’ 29 April news conference was different than all the others as he offered a defence (hence the title from the seminal work of the major 19th century British intellectual John Cardinal Newman) of the committee’s work and tough decisions throughout the lockdown. 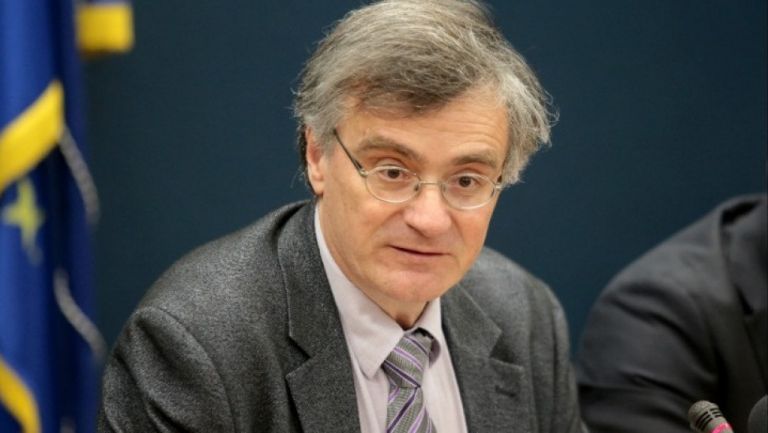 Tsiodras’ 29 April news conference was different than all the others as he offered a defence (hence the title from the seminal work of the major 19th century British intellectual John Cardinal Newman) of the committee’s work and tough decisions throughout the lockdown.

Aside from the necessary accounting yesterday was devoted to explaining  the specific measures to be implemented to unlock the country and to to defending  his own role during the five-week lockdown, including what many charge were errors in judgment which he insists  were merely based on the less comprehensive data available at the time..

Tsiodras as chairman of the government advisory committee and personal advisor to PM Kyriakos Mitsotakis has drawn the spotlights of public attention and  the domestic and international press has beatified him.

His mild-mannered and somewhat removed delivery soothed anxieties but was punctuated by his occasional stern rebukes of the press – either for interrupting or asking a question which he believed disoriented the public or drew unfounded conclusions.

They describe him as anything from a national father-div although he seems more like  the lost scientist-uncle who emerged after many years to guide the family through rough waters.

At a daily, nationally-televised news conference he rattles off the latest data on deaths, intubations, and demographics  with locomotive speed and then expands  to his own interpretation of the results of the most recent research in China, the UK, the EU and elsewhere.

Two of the most difficult decisions to be entrusted to the committee (and decided by the government) were that of shutting down all schools and universities and now that of opening them up.

The decision on 10 March to shut down the schools immediately was not equally welcomed by all members of the committee but there were pro-active members that pressed their case hard and reservations were transcended.

Undeniably it was the first, giant step (in terms of acclimating the public) toward  the general lockdown that was instated nearly two weeks later, on 23 March, with a televised national address by a sombre Mitsotakis who duly noted the perceived need to curtail civil liberties in order to protect public health.

Not getting to the church on time

In the interim the government laid the groundwork for the closure of thousands of churches around the country even during the high holy days of Easter while at the same time a number of clergymen such as a psychiatrist-priest named Stylianos Karpathiou were taking to the airwaves to tell television viewers that one cannot possibly contract the virus through Orthodox Holy Communion (wine and bread administered from a common cup with a common spoon).

Indicatively,  Karpathiou was not confronted with any  scientific perspective or data when he told ERT state-run television that it is impossible for one to catch a virus through the true body and blood of Christ,  that it was a matter of faith and that true believers cannot possibly catch it that way.

It was the moment when PM Kyriakos Mitsotakis was exerting quite a lot of friendly persuasion on Archbishop Ieronymos of Greece to secure a total church shutdown in the 12-member Holy Synod. Mission accomplished.

Again now amidst substantial differentiation of views in the committee on the safety and utility of opening schools for a few weeks, the government took the decision to open up lyceums and gymnasia (high schools and junior high schools or grades 7-12).

That was a departure from the initially  prevailing view in public discourse which called for  opening up schools only for  students in their  last year of school to  make final preparations for the  annual Panellinies university entry exams, with the tutoring centres (frontistiria) where the actual preparation is done “unlocked” and legally in full swing too. The exams have been postponed until early July.

Dr. Tsiodras wants to see how the return of students to school does or does not impact on the rate of spread of Sars Cov-2 in the community and he cites research that maintains that the chance of child-adult transmission or  the other way around is negligible.

‘Open and play it by ear’

In that sense, the gradual loosening of restrictions and the conceivable re-implementation if there is a spread resembles a limited, controlled herd immunity experiment.

Professor Tsiodras’s conviction that there is minuscule chance of children transmitting the virus is not shared by all members of the committee, nor is his view that one should open schools and just see and record what happens.

Tsiodras also opposes taking children’s temperature before they enter the school. “We have no plan to take the temperature of the children. It offers nothing,” he declared.

“We will have vigilance [in general] and numbers when not cooked tell the truth. We do not cook the data.”

The jury is out

Tsiodras cited Chinese data showing that less than one percent of groups of children tested had serious Covid-19-related illness.

General Lyceums will open on 15 June and vocational high schools (EPAL) the next day.

Some, like Assistant Professor of epidemiology Gkikas Magiorkinis, are underlining that there is not adequate scientific data to establish the actual child transmissibility rate.

“My opinion is that schools need to re-open but with design and measures. We should not assume that children do not transmit,” he told To Vima English.

Magiorkinis is keenly aware that the parents of many children are scared and anxious about their health and he offers they should be able to opt for home study, and that this option should be extended year-round for kids who are in a vulnerable group or whose parents are.

Currently involved in an Imperial College research project (recently funded with 400,000 pounds) for an effective antibodies test, he questions the scientific grounding of some of the public papers on transmission from children.

“There is a pyramid of credibility [with the apex being the highest]. This one on child transmission is at the bottom of the pyramid,” he notes.

It is precisely that ambiguity that pushed the government to postpone the decision on whether to open primary schools (Grades 1-6) until 1 June, so it has bought time.

This way it will not have to single-handedly shoulder the blame for a possible spread and the delay will make it easier to argue that the semester is so truncated it is not worth the risk.

Tsiodras firmly defended his initial guideline for people not to wear masks unless they were ailing or near sick people and his later turnaround which led to the current policy: masks are mandatory in mass transit (both driver and passengers) in the interior of shops and in other places with close gatherings of people and the fine for non-compliance is 150 euros.

“As regards protective measures and the strong recommendation for the use of masks (in all other circumstances with a lot of people) that we have now adopted it may seem irrational to you because we said the opposite just a few weeks ago. You must listen to all the data that now support use of the mask but did not back then,” Tsiodras said.

Some members of the committee and some distinguished clinicians have backed that explanation and prefer to focus on the new recommendation to use masks in a variety of circumstances.