Migrants in closed facilities are among the most vulnerable groups for contraction and spread of Covid-19 health ministry spokesman and professor of epidemiology Sotiris Tsiodras told a news conference today. 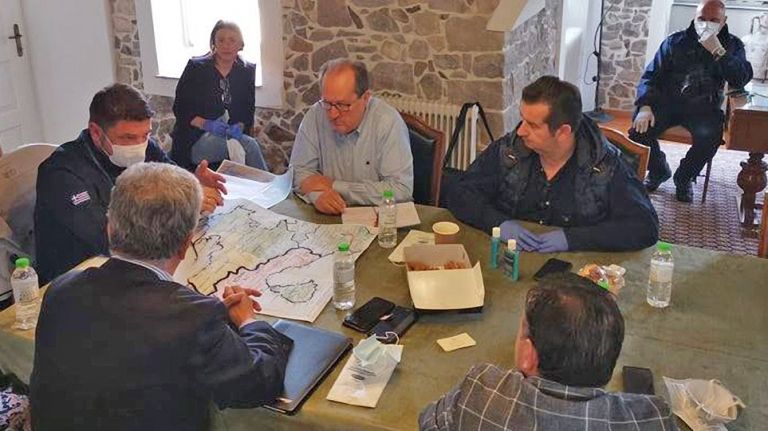 The underministry for civil protection has ordered a 14-day quarantine of the town of Kranidi in Argolida prefecture the Pelopponese after 150 asymptomatic African migrants of 570 residents tested positive for the coronavirus.

An 8pm to 8am curfew has been imposed in the town and during the day residents will be allowed to leave home only for food shopping or visits to doctors and pharmacies.

At the same time the death of a 35-year-old man who was the father of an 18-month-old infant from COVID-19 with no apparent underlying medical conditions within two days of being admitted to Saint Demetrios Hospital in Thessaloniki appears to have baffled experts who are uncertain about what led to general organ failure in the patient.

The outbreak at the migrant facility is said to the most serious single incident epidemiologically since the beginning of the epidemic in Greece.

The residents of Kranidi have expressed alarm  and are demanding widespread testing in the community as the migrants regularly visited supernarkets, banks and other venues.

An additional 50 migrants were sent to the facility in the midst of the epidemic.

The outbreak in Krandidi has raised questions in public discourse about whether adequate measures have been taken at the Moria refugee and migrant camp on the Aegean island of Lesvos where 19,000 reside in a sort of favela.

The deputy minister for civil protection, Nikos Hardalias, along with a large team of experts from the National Organisation for Public Health (EODY) today paid an emergency visit to the 10,000-resident Ermionida town where the mainly Somali but also other sub – Saharan African migrant have been put up at a local hotel.

The ministry is sending six doctors and four nurses as well as a number of ambulances to the town in order to offer primary care and transport individuals who may develop symptoms of disease.

An EODY contingent will remain on site during the quarantine.

The army has set up a tent outside the hotel with eight beds.

Kranidi and the wider area of Ermioni in Argolida prefecture in the Peloponnese are a tourist destination.

Migrants in camps among vulnerable groups

Migrants in closed facilities are among the most vulnerable groups for contraction and spread of Covid-19 health ministry spokesman and professor of epidemiology Sotiris Tsiodras told a news conference today.

The 150 coronavirus-positive individuals represent nearly one-third of the 500 samples taken from the migrants and employees at the Karnidi facility, where two employees also tested positive.

The mass testing was conducted after a pregnant 28-year-old Somali woman tested positive.

Meanwhile, Tsiodras today told a daily news conference that aside from the migrants six new cases were confirmed in the last 24 hours and that five more people have died.

That brings the death toll in Greece to 121, most with serious underlying health conditions and an average age of over 70, and 2,401 confirmed cases.

Moreover, 51 patients (only 16 of them women and 84.7 percent of the total with serious prior health conditions) with an average age of 67 are currently being treated in hospital ICUs.

Tsiodras said 46 patients have been taken out of ICUs in the last 24 hours.