The Greek government’s statements of condemnation obviously do not address the issue, nor does a merely formal alignment of the government and the opposition suffice to confront Ankara’s provocations. 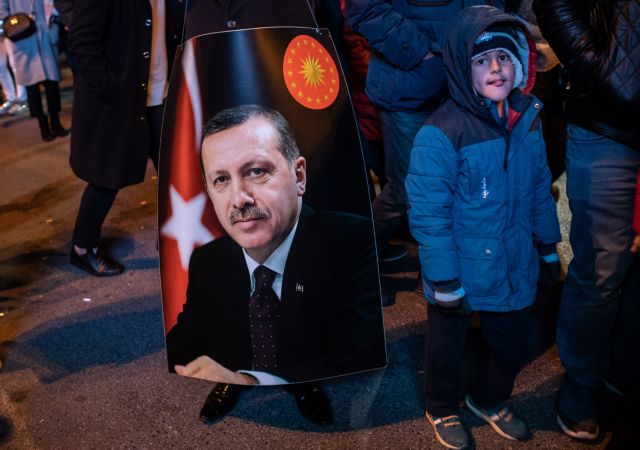 epa07477656 A boy stands near a picture of Turkish President Recep Tayyip Erdogan as supporters of the Justice and Development Party (AK Party) celebrate early results for the Istanbul mayoral race in the local election in Istanbul, Turkey, 31 March 2019. Some 57 milion people voted in local elections in Turkey's capital and the country's overall 81 provinces. EPA/SEDAT SUNA
Share

The government and the opposition, trapped in a ruthless political clash just ten days before the European Parliament election, are downplaying or even ignoring Turkey’s evolving and escalating hostility in the region.

With constant manoeuvres, Erdogan is disputing the status quo in the Eastern Mediterranean and seeking an opportunity to advance what he views as his interests.

He has pressed forward with gas exploration in Cyprus’ Exclusive Economic zone with a rather tepid international response.

He formalised his claims by summoning the diplomats of neighbouring countries, including Cyprus, Egypt, and Greece.

He is pressing on with huge military exercises and loses no opportunity to violate Greek airspace.

If one factors in the tensions in the broader region – with attacks on ships and the open conflict between the US and Iran – it is clear that the situation is becoming explosive.

The Greek government’s statements of condemnation obviously do not address the issue, nor does a merely formal alignment of the government and the opposition suffice to confront Ankara’s provocations.

Unfortunately, domestic political polarisation does not permit the hammering out of a unified national line that can address current threats and provide a long-term national strategy.

Pressured by domestic economic problems and his party’s loss of the Istanbul mayoralty, Erdogan is seeking a way out of his impasse abroad so as to rally his domestic political base.

Erdogan is unpredictable and volatile and thus there is a danger that he might provoke a crisis that could easily spin out of control.

There is enough military firepower gathered in the Eastern Mediterranean to pose the risk of triggering an explosion at any moment.

The leader of the American superpower is also unstable and unpredictable enough to provoke a crisis in the region in order to flex his muscle.

Meanwhile, the fact that the European Union is almost paralysed and unable at the moment to take bold decisions further complicates the situation.

In Greece, the necessary national understanding is being undermined by the frenzied electoral campaign.

The prime minister, who should have taken the initiative to rally political forces so as to forge a national strategy, is preoccupied with his struggle to cling to power at all costs.

The result is that Greece is drifting and monitoring events as a bystander instead of seeking alliances and fending off designs and provocations.

Though there is absolutely no room for complacency, we are preoccupied with polarising domestic clashes instead of seeking the basis for an understanding at least on national issues that have bedeviled us for decades.