Erdogan warns Greece, Cyprus, not to corner Ankara on energy

‘We tell our friends the necessary words – don’t pressure us and don’t put us in a tight spot. That is the only way that mutual trust can develop,’ Erdogan said. 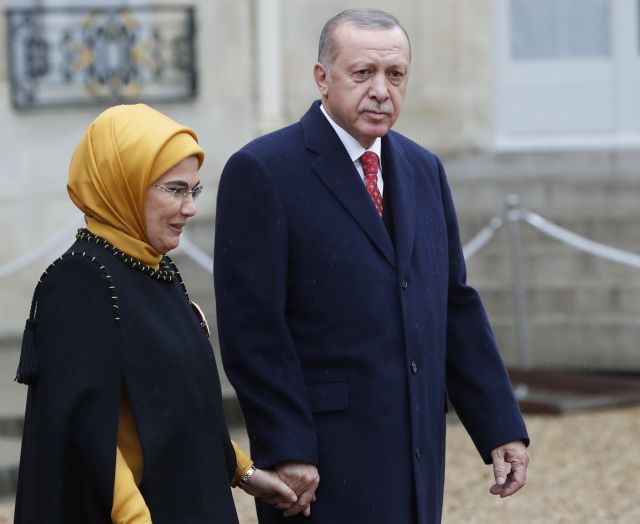 epa07157533 Turkish President Recep Tayyip Erdogan (R) and his wife Emine Erdogan (L) leave the Elysee Palace ahead of the international ceremony for the Centenary of the WWI Armistice of 11 November 1918, in Paris, France, 11 November 2018. World leaders have gathered in France to mark the 100th anniversary of the First World War Armistice with services taking place across the world to commemorate the occasion. EPA/CHRISTOPHE PETIT TESSON

“We tell our friends the necessary words – don’t pressure us and don’t put us in a tight spot. That is the only way that mutual trust can develop,” Erdogan said regarding Ankara’s energy interests in the Eastern Mediterranean.

“On the issue of the Eastern Mediterranean there are conflicting interests. There is a joint collaboration between the Greek Cypriots and America’s ExxonMobil. The Americans have adopted the stance of ‘Just don’t go there (Bloc 10 of Cyprus’ EEZ where ExxonMobil is drilling] and beyond that you can do whatever.’ As you know, we started [hydrocarbons exploration ] in the north [near the Turkish-occupied part of Cyprus], Erdogan told a gaggle of journalists en route from Paris to Turkey.

He said that Turkey will have two drilling ships and two exploration vessels.

Erdogan told journalists that Ankara’s oil and gas exploration efforts will take place in both the Eastern Mediterranean and the Black Sea.

Earlier, Deutsche Welle had reported that drilling for off the shore of Cyprus are not less “explosive” than the deposits in the Eastern Mediterranean.

The internet site of the Swiss daily Neue Zuercher Zeitung reported on the issue in a piece entitled “Drilling is rekindling the Cyprus problem”, an apparent reference to efforts to jump-start settlement talks.

The newspaper opined that, “It was almost always improbable that Ankara would obstruct with military means an American-owned ship, such as ExxonMobil’s Stena IceMax. The American Navy is present in the area and Tayyip Erdogan is in this period attempting to de-escalate tensions in US-Turkey relations. Moreover, Bloc 10 is in an area that Ankara is not disputing [with the Republic of Cyprus]. Erdogan’s recent threats, however, indicate that possible deposits in the Eastern Mediterranean may provoke tensions, as Turkey wants a say in the carving up of deposits and in securing a piece of the pie.”