After resignation, Kotzias will not go gentle into that good night

Kotzias declared that the government spokesman is hiding the truth about the reasons for his resignation, and he called upon the prime minister to make public the nine-page resignation letter that he submitted to him on 16 October. 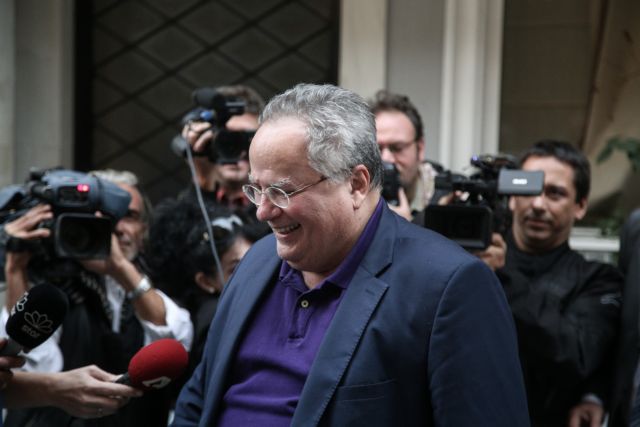 Even as the government engages in a damage control operation to play down the impact of the resignation of former foreign minister Nikos Kotzias, with government spokesman Dimitris Tzanakopoulos declaring that the minister’s decision was “politically incomprehensible”, Kotzias himself is training  his fire against both Tzanakopoulos and Defence Minister Panos Kammenos, who accused him of mismanaging foreign ministry secret funds.

“Whoever engages in mudslinging has dirty hands,” Kotzias said, alluding to Kammenos.

Kotzias declared that the government spokesman is hiding the truth about the reasons for his resignation, and he called upon the prime minister to make public the nine-page resignation letter that he submitted to him on 16 October.

Today, at a Brussels news conference following the EU summit meeting, Tsipras claimed that he has not read the letter, and that he will do so upon his return to Athens. He also made clear that he will not make the letter public, citing the fact that “strictly personal” was written on the envelope.

Tsipras said that for him, the entire affair is over, and that the government will proceed on its course.

Those who are familiar with Kotzias are convinced that he will not remain silent.

His first intervention came after a four-hour meeting of his left-wing political movement Pratto (“I act”). He reportedly told his comrades that in parliament he intends to take his place to the left of SYRIZA, and that it is crucial that the Prespa Agreement come into effect.

He reiterated that the defence ministry has no role in shaping foreign policy, a reference to Kammenos’ presentation, on an official visit to Washington, of a Plan B to replace the government-backed Greece-FYROM accord.

Kotzias said a mudslinging campaign has been unleashed against  him and against the responsibility of a politician to resign when he disagrees. He said that while  many proclaim that one should not be glued to one’s political post for the sake of power, when a minister does his duty he is abused, and behind that abuse there is immorality.

“I am the only person who tabled a law passed by parliament mandating that those funds [above 25,000 euros] be reviewed by the legislature. Whoever engages in mudslinging, however, has dirty hands,” Kotzias said in a thinly veiled reference to Kammenos.

“I stubbornly demanded that this law apply to all ministries, which annoyed some people. We [Pratto] are determined, with MPs from SYRIZA and other parties, to table a law requiring a review of how these [secret] funds were used by other ministries, to which this democratic procedure does not apply. The fact that the only ministry that has established a review procedure is criticised by others is ridiculous,” he was quoted as saying.