Nine out of ten Greeks believe austerity policies will continue

Regarding wage levels, the majority responded that the minimum wage in the private sector should be determined through negotiations between the government, employers and workers. 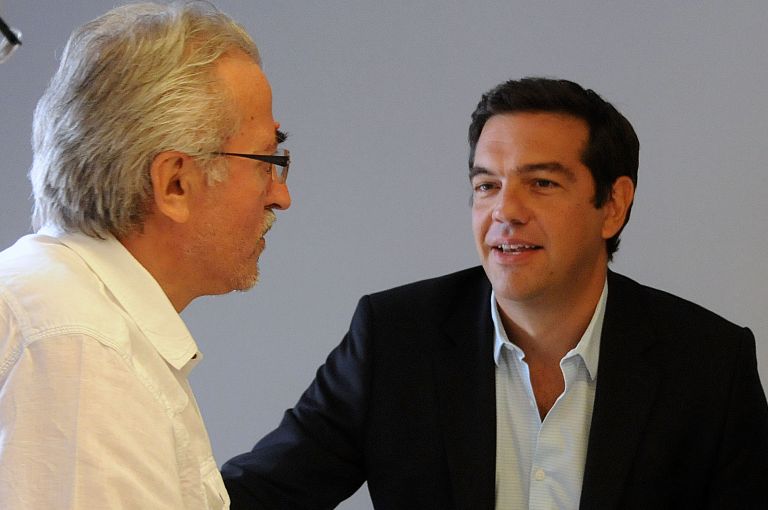 Ο πρόεδρος του ΣΥΡΙΖΑ Αλέξης Τσίπρας (Δ) συνομιλεί με τον πρόεδρο της ΓΣΕΕ Γιάννη Παναγόπουλο (Α), κατά την διάρκεια της συνάντησής τους, την Τρίτη 2 Σεπτεμβρίου 2014. Ο πρόεδρος του ΣΥΡΙΖΑ Αλέξης Τσίπρας θα συναντηθεί με τα προεδρεία της ΓΣΕΕ και του ΣΕΒ στο πλαίσιο της προετοιμασίας του για την ΔΕΘ. ΑΠΕ-ΜΠΕ/ΑΠΕ-ΜΠΕ/ΕΥΗ ΦΥΛΑΚΤΟΥ (File: 14403670.jpg )
Share
Even as government members are celebrating Greece’s exit from the bailout memorandums, a new poll shows that the overwhelming majority of Greek citizens are convinced that austerity policies will continue.
According to an opinion survey conducted by Metron Analysis for the General Confederation of Greek Labour, Greece’s largest private sector umbrella union, 89 percent of those surveyed believe that austerity policies will continue after the bailout programme.
The poll, which was conducted one week after the bailout exit, on 28-29 August, showed that eight out of ten SYRIZA voters also believe that austerity will continue in the post-memorandum era.
It appears that citizens are not persuaded by the generous pledges of ministers, or by the prime minister’s intention of announcing handouts, in order to reverse the negative climate for the government.
The poll also shows that nearly 70 percent of respondents believe that the country at this time is proceeding in the wrong direction.
Regarding wage levels, the majority responded that the minimum wage in the private sector should be determined through negotiations between the government, employers and workers.
Eighty-three percent of those surveyed believed that the prime minister should have regular contacts with labour organisations in order to cooperate and exchange views.
From the overall findings of the survey, one can safely conclude that the end of memorandums does not signal a transition to a new era, mainly because the country’s existing commitments to creditors remain in effect.
In that context, the conclusions drawn by the survey underline the need for a cooperation of the social partners with the government and the prime minister, in order to reach the best possible arrangements.

It is indicative that a majority of respondents believe that the prime minister is avoiding meetings with workers, either because he is not in a position to satisfy their demands, or because creditors do not allow him to do so (which an aggregate of 30 percent of respondents noted spontaneously).