A key focus of today’s COVID-19 Committee meeting is an analytic review of places with a high viral load and low rate of vaccination, especially Attica, Crete, and the Southern Aegean. 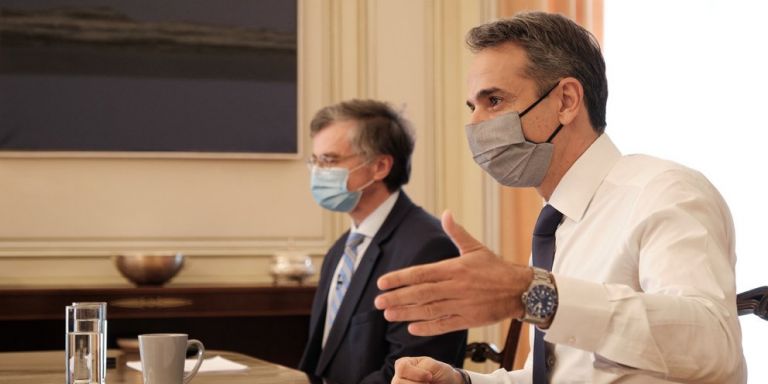 The National Committee on COVID-19 is meeting today in one of its most critical sessions as the scientific community in Greece and globally grapples with possible measures and strategies for coping with the furious spread of the virus’s extremely transmissible Delta variant.

With the government having ruled out any sort of national lockdown, the experts will try to sort out the mechanics of prospective local lockdowns (the possibility has already been announced) based on local or regional epidemiological data.

Measures on the table

One of the conundrums the Committee faces is safety in inter-city mass transit (KTEL inter-city buses, aeroplanes, and trains) and here it appears to be veering toward a mandatory COVID-19 rapid or PCR test in the last 48 hours before travel begins.

This measure is already in place for visitors to islands, but enforcing it across-the-board poses logistical difficulties, as it presupposes road blocks and checks at tolls, a daunting if not impossible task.

A number of experts back mandatory use of masks both indoors and outdoors only in places with a notable surge in cases.

Naturally, the Committee will have to review the worst-case scenario if transmission spins out of control.

The approach here would include a package of measures including local restrictions on movement and banning music at restaurants, bars, and cafes (the ban has already been enforced but was lifted recently).

Members of the COVID-19 Committee and the government are, of course, already monitoring the epidemiological data nationwide.

Warning signals from Professor of Epidemiology Sotiris Tsiodras (who became a trusted household name in the first wave of the pandemic as Committee spokesman) on 5 July were taken as a sign of the gravity of the situation.

Tsiodras met with Prime Minister Kyriakos Mitsotakis regarding how to handle the surge in cases from entertainment venues and huge parties that have already been proven to be super-spreading events, and on how to intensify and speed up the recently lagging vaccination rollout, which the government has dubbed “Operation Freedom”.

The ramifications of a summer case surge

On the one hand, the models of most Greek scientists project a significant spike in cases in the immediate future, with a minimum of 2,000 new cases confirmed daily.

On the more positive side, there has not been an increase in hospitalisation. The latest weekly average was 41 patients.

The spread of the Delta variant, which is expected to be the predominant one in a matter of weeks, has apparently not been hindered by high summer temperatures or even precautionary measures such as masks (experts note that transmission between two people not wearing them occurs within a few seconds). The government recently lifting mandatory use of them in public places.

A key focus of today’s COVID-19 Committee meeting is an analytic review of places with a high viral load and low rate of vaccination, especially Attica, Crete, and the Southern Aegean – the areas publicly cited by Tsiodras – due to a sudden, larger surge in the number of confirmed cases in these regions.

It is perhaps no coincidence that these are the areas that have already begun to receive relatively large numbers of tourists.

In Attica, the youth play a notable role in the spread of the virus as most are unvaccinated and do not appear to have been persuaded – judging by the total lack of protective measures at bar and clubs – that the epidemic is still very much present.

The initial reaction of experts and the government was to push vaccination with all possible means, including a somewhat belated campaign of public interest messages regarding the need for vaccination and its advantages.

In the hotspot island of Crete, the health ministry has begun administering vaccines in remote areas with its highly effective mobile units.

The government is also trying to lure the country’s youth into be vaccinated, as the spread of the Delta variant has been particularly intense in younger age brackets.

Those fully vaccinated will be given a pre-paid card for transportation to vacation spots and for admission to cultural events, museums, and archaeological sites.

Athens University Medical School Professor of Virology and Epidemiology Gkikas Magiorkinis, the spokesman for the National Committee on COVID-19 has expressed the view – in an interview with SKAI television – that the Delta variant will inevitably result in a fourth wave of the epidemic, with a minimum of 2,000 new cases daily.

Noting that young people comprise the majority of new cases, Magiorkinis underlined, “It is exceptionally difficult to stem the advent of the fourth wave.”

Magiorkinis said that although it is very difficult to conduct vaccine or testing checks for land travel, inter-state travel will soon be permitted only for the COVID-19 vaccinated.