Trump’s ostpolitik moment: A new alliance for peace with Russia 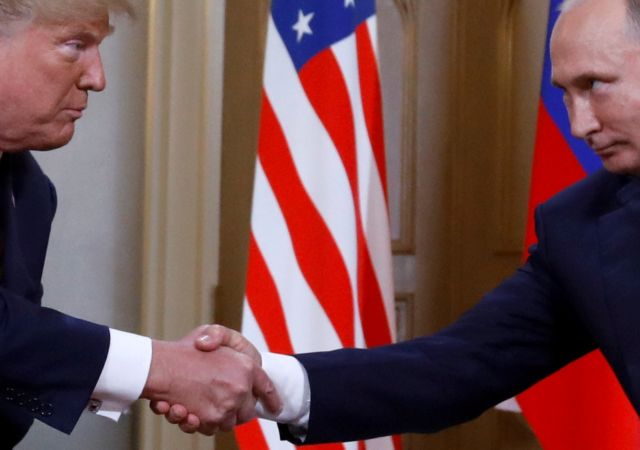 50 years ago a far-sighted strategic statesman, Willy Brandt, turned the democratic world’s approach to Russia inside out. His Ostpolitik opened a new era of contacts with Moscow which was still being ostracized after the invasion of Czechoslovakia in 1968, its support for anti-western movements worldwide, and its relentless propaganda operation to influence politics with the fake news techniques used in a modernized setting today.

Richard Nixon and Henry Kissinger seized on Brandt’s Ostpolitik with their own version of the great opening to China 40 years ago, which transformed the world.

Today, Europe is leaderless and rudderless, with only France’s President Emmanuel Macron, willing to think out of the box while Germany wait for the post-Merkel world and Britain is on its isolationist autopilot with Brexit and two possible prime ministers, Boris Johnson and Jeremy Corbyn who cannot spell the words strategy or geo-politics.

The time is right for an American Ostpolitik with the US President taking the lead in shaping a new world order in which the United States will remain a key-player, keep the West and the Transatlantic Alliance together, and provide for a fair competition and peaceful co-existence with the rising world-power China and a more assertive great power Russia.

This is Donald Trump’s moment: as a non-ideologue , non-interventionist President and former business leader Trump knows that a liberal ruled-based economic system – vital for the US, its allies and the world economy – depends above all on a balanced global security order. Therefore he should strike a historic accord with his counterpart Vladimir Putin and invite the Russian President to join NATO, after Moscow ceases its aggression against the Ukraine. By a new US Ostpolitk based on foreign policy realism not wishful thinking Trump would demonstrate self-confident and powerful American leadership ready to open a new chapter in US-Russian relations paving the way for a New Alliance For Peace with Russia, in which both, Americans and Russians, would share the burden and responsibility for European security.

A New Alliance For Peace with Russia would first transform NATO into a Transatlantic Security Organization from Vladivostok to Lisbon, second make a re-start of meaningful US-Russian nuclear disarmament negotiations leading to a new arms control architecture possible, and thirdly a decisive Transatlantic- Russian defense alliance, also open to China, could become part of a future trilateral dialogue between Washington, Moscow and Beijing, as all three are indispensable nuclear powers of the 21st century.

French President Manuel Macron, Europe’s main leader on international affairs, was the first to acknowledge this summer the new security realities Europe is facing in a post Post-Cold-War era. Europe is alarmingly unarmed after the termination of the INF treaty. Strained US relations with key allies in Europe are producing a fatigue in Washington that Europeans, and especially Germans, want to continue to free-ride on defense. This could eventually lead to moderation of an US NATO-commitment and erosion of the Alliance. As Macron noted “It is absurd to have worse relations today with Moscow than we had during the cold war”.

Brussels talks of “ European strategic autonomy” from the United States. But this  remains a foggy vision, and is far from being embraced by all EU-member states. The London based International Institute for Strategic Studies recently estimated that the EU would need between $288bn and $357bn to be in a position to win a limited land war against Russia.

In consequence Emanuel Macron made a significant diplomatic move last August as a prelude to the G7 summit in Biarritz by inviting President Vladimir Putin to his summer retreat in Fort de Brégancon. There the French President called for “a new security architecture between the EU and Russia”. Despite the “misunderstandings of the past” he said, Russia “is profoundly European…we believe in a Europe that stretches from Lisbon to Vladivostok”.

Both Brussels and Washington ignored Macron’s  summer overtures towards Moscow, so Macron decided early November to prod and provoke Europe into lifting itself for its defense torpor and its refusal to treat Russia as a partner rather than an irritant opponent. Macron declared in an interview with The Economist that NATO was experiencing “brain death”. The French President casted doubt of Article 5 of the Alliance, its collective-defense- clause, and said out loud what most of his fellow EU-leaders only speak of privately: that he was not sure whether America would show up to defend Europe in a crisis.

Emanuel Macron is correct. The EU’s security and defense policy as of today has neither the means nor the political will to provide capabilities for its own European collective defense. A European security architecture embedded in a Russian defense architecture though would mean the end of NATO for good. Macron’s concerns should however not be misinterpreted in Washington as an initiative against NATO, but on the contrary it reflects a widespread deep concern in Europe’s capitals that the Americans will no longer defend Europe or engage meaningfully in European security.

To make a President’s launching of A New Alliance For Peace with Russia a success and get approval from US Congress, EU- and NATO countries, bold American diplomacy together with the so-called “Normandy” format that brings together Russia, Ukraine, France and Germany, will be needed.  First and foremost the implementation of the 2015 Minsk agreement should be prioritized as the Ukraine crisis is a major conflict Americans and Europeans alike want to see resolved.  The new elected President Volodymyr Zelensky will have to signal that Kiev could recognize Moscow’s incorporation of Crimea in exchange for Russia’s acceptance of the full reintegration of the Donbas into Ukraine without any special status. The next “Normandy” format is tentatively scheduled for 9 Dec. If such a comprehensive agreement can be achieved in the coming weeks that would enable Washington and Brussels to de-freeze US and European economic sanctions against Moscow and bring back President Putin as eighth member to the G-7 summits.

The preamble of such a new treaty of A New Alliance For Peace would outline the strategic purpose of this new Transatlantic-Russian Security Organization: to commonly guarantee European security guided by the principles of mutual respect, parity and equal treatment. The treaty itself could adopt all NATO-articles on which old and new members, Americans, Russians and Europeans, would agree upon; Article 5 would remain obligatory as the best mutually guaranteed security. A special clause would allow Washington, Moscow and the European member-states on security matters outside European territory “to agree to disagree”. The New Alliance would be open to all European countries including those which have been in conflict with Russia this century. Military experts would be tasked to work out technical details, including such important aspects as interoperability between different systems which already NATO is facing today: The recent purchase of Russian equipment by NATO-member Turkey has brutally exposed this problem. Brussels could remain as one headquarter of the new security alliance and a second Russian – why not in Vladivostok – would be added. Each headquarter would be run at the same time by a US and Russian 4-star General. The Secretary General would continue to be a European.

A New Alliance For Peace with Russia is in the strategic interest of the United States, Europe and Russia: it keeps the Transatlantic Alliance together by including Moscow as a guarantee-power for European security, it initiates a new détente policy between Washington and Moscow by also rebalancing the Sino-Russian rapprochement, and it might eventually convince Chinese President Xi Jinping to agree joining a new trilateral dialogue on nuclear missile-arms- reduction-talks, a subject, which Trump already raised with Putin and Xi last June on the sidelines of the G 20 summit in Osaka. Just as Richard Nixon, a president much scorned and troubled by domestic politics set the world moving forward by his opening détente-policy to China, can a Donald Trump Ostpolitik make the world in the 21st century “safer for peace”.

Denis Mac Shane is a British columnist and author, Senior Advisor to Avisa Partners Brussels and served as UK Minister of Europe during the Blair years; Margarita Mathiopoulos is a Visiting Professor at the Dept. of Diplomacy of China Foreign Affairs Univ., Beijing, and Professor emerit. of US-Foreign Policy and International Security, Univ. of Potsdam; she served

as foreign policy advisor to the Chairman of the Free Democratic Party of Germany 2002-2011.