Mitsotakis also said that the government is aiming at “Syrizafication” of the Constitution, with provisions that reflect the ruling party’s ideological leanings rather than the broad consensus that the revision process requires. 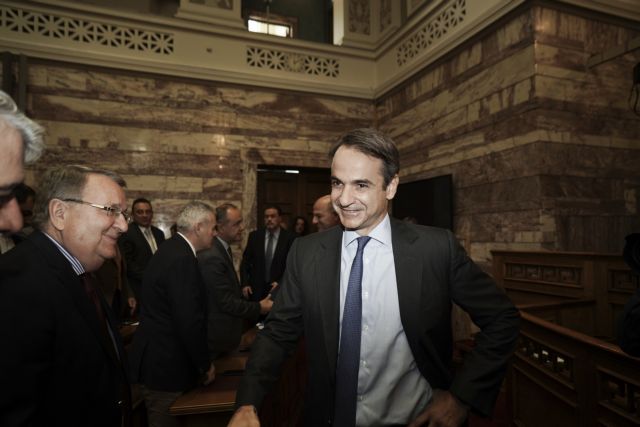 New Democracy leader Kyriakos Mitsotakis launched a full frontal attack against SYRIZA over the ruling party’s proposed Constitutional Amendments, charging that the government is using the most exalted legislative process as a diversionary tactic, to draw attention away from the country’s enormous social and economic problems.

Mitsotakis also said that the government is aiming at “Syrizafication” of the Constitution, with provisions that reflect the ruling party’s ideological leanings rather than the broad consensus that the revision process requires.

Mitsotakis said that the PM “belatedly remembered the Constitutional revision, simply in order to avoid any significant changes. They want to take the country backwards. After the 2008 revision, which was extremely limited, we as a country cannot afford to lose another ten years.”

The conservative party leader said that SYRIZA has included Article 86, which involves ministerial responsibility, in its list of constitutional articles to be amended, while he was demanding 12 years ago that the Article be changed and SYRIZA was indifferent.

Mitsotakis denounced several of the proposed amendments, including ones to facilitate calling a referendum with a popular petition, to hold up to six monthly votes to elect the President of the Republic if the two-thirds majority is not reached, directly proportional representation (which Mitsotakis said will leave the country ungoverned, due to the difficulty of forming coalition governments in Greece) and the loosening of church-state relations. The last two can be changed by a simple law and need not be enshrined in the Constitution, he said.

Mitsotakis said that it is a sign of hubris for SYRIZA to support referendums, as it reversed the “No” result in the 2015 referendum on accepting or rejecting the bailout memorandum offered by creditors.

He also said it is hypocritical for SYRIZA to now say it is important not to dissolve parliament due to an impasse in the presidential election proceess, as the now ruling party with its stance in 2014 triggered a dissolution of parliament.

Overall, Mitsotakis said that the government’s proposal is reactionary and anachronistic and will lead to a Constitutional deadlock.

“SYRIZA wants to Syrizafy the Constitution and we won’t allow it,” he said, underlining that the government’s proposal says nothing about public administration, evaluation and meritocracy, education, incentives for growth and investment, or the need for the independence of the judiciary and expediting the handling of cases.