Editorial: The degradation of the education system

The government continues to table laws with changes in the education system, without any consensus or prospects, with the sole aim of electoral gain and political favours. 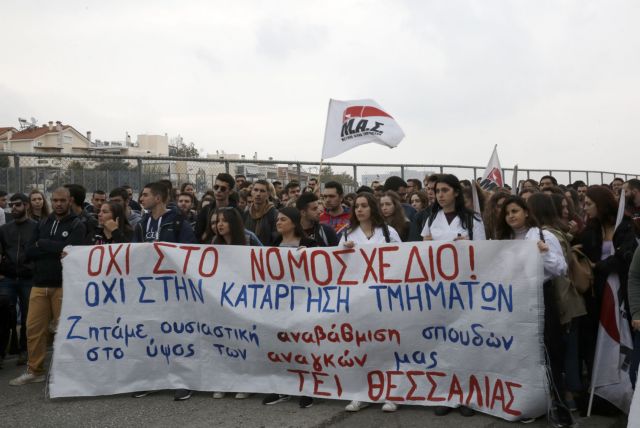 Where is the student movement? Where are the university students to reclaim their classrooms and academic tranquility? These were the questions posed by Education Minister Kostas Gavroglu a few days ago, in response to the criticism of the government over the situation in universities and the occupation by the anarchist group Rouvikonas of a room in the Philosophy Faculty of the University of Athens.

Yesterday, the minister received his answer. A large group of university students and school students broke the door and invaded his office, in order to tell the minister and the government that the ‘Gavroglu law’ “wants to turn universities into factories that produce people to be absorbed by the labour market, in order to satisfy its needs”.

University and school students did their “revolutionary” duty by protesting with ideological constructs that are the remnants of what they view as the old, glorious era of the student movement, when it was fighting against the intensification of studies. They do not want specialisation or certification. They do not seek “educational competence”, so that they may be able to teach. They do not want universities that are “factories that produce people to be absorbed by the labour market in order to satisfy its needs”.

The government and the education minister personally, are now paying for their ideological views, which upheld this perception of education, and continue to do so.

They reject the concept of excellence in education. They are not interested in establishing order in the university. They are not concerned with the evaluation of the performance of professors and teachers. They are not bothered by the fact that university faculties’ spaces have become an asylum for marginal groups or, even worse a refuge for those engaging in unlawful acts.

Professors in the Faculty of Philosophy are vociferously complaining, and professors at the University of Thessaloniki are speaking up about drug dealing inside the university, but no one cares.

Despite all that, the government and the minister offer pompous declarations of concern about the problems of the younger generation, the brain drain, and the contempt for politics among young people.

They continue to table laws with changes in the education system, without any consensus or prospects, with the sole aim of electoral gain and political favours.

This sad situation downgrades and undermines any serious efforts within Greek universities.

Above all, it undermines the future of the younger generation, and leads to behaviours and outlooks that were exhibited yesterday in Mr. Gavroglu’s office.