‘If Mr. Kammenos wants to participate in these efforts toward stability, certainly he will. However, this cannot be done with constant statements and startling moves, or when he pays an official visit to Washington and presents his personal views and not those of the government. We cannot move forward that way,” said the former education minister. 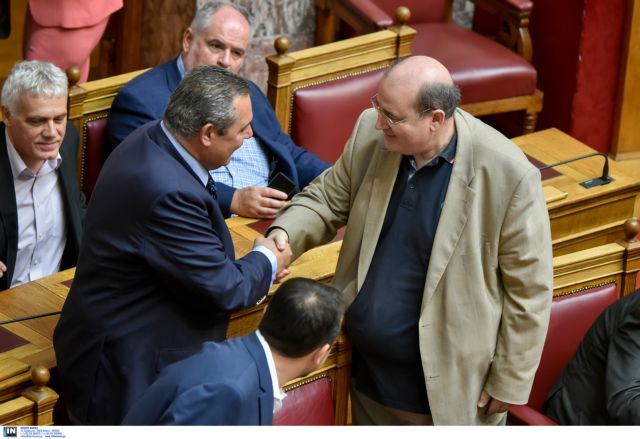 Amidst open disputes between SYRIZA and Independent Greeks cadres over Panos Kammenos’ trashing of the Greece-FYROM Prespa agreement while on an official visit to Washington for talks with US Defense Secretary Jim Mattis, former education minister Nikos Filis said that the ruling coalition was a “necessary choice” and that the collaboration will end with the next general election.

“It [the coalition] emerged as a necessary choice, following the result of the September, 2015, general election. Certainly, it is not of a strategic character, but rather is a “limited responsibility” coalition, and its duration is up until the next general election,” said Filis, who has emerged as the left-wing conscience of SYRIZA, a role that he has cultivated.

“Especially now that we are in a period of increased possibilities of economic growth…it is obvious that with the elections there will be new balances, where there will be a possibility for  programmatic, strategic convergences. Two power blocs, one with SYRIZA at its core and the other built around New Democracy, will emerge. Whether the Independent Greeks fit into that scheme has to do with the physiognomy of that party. Currently it does not fit, and it must change in order to do so,” Filis said.

“Mr. Kammenos has adhered to the government’s policy on many issues, such as migration, and he has categorically differentiated his position on the Macedonian naming issue. The surprise lies in the fact that Mr. Kammenos participated in a government whose programme statement as regards the Macedonian naming issue provided for a composite name [including the name Macedonia]. Hence, he knew what the solution would be. When there is an agreement in this government, he cannot suddenly declare that there is a categorical disagreement. He will disagree, but not with a disagreement that will topple the government, and create conditions of political instability,” Filis said.

“If the government’s cohesion is threatened at this time, one can see that there will be conditions of political instability, which will endanger any gains we have made in the area of economic growth and in the improvement of citizens’ everyday life. What we want is political stability. If Mr. Kammenos wants to participate in these efforts toward stability, certainly he will. However, this cannot be done with constant statements and startling moves, or when he pays an official visit to Washington and presents his personal views and not those of the government. We cannot move forward that way,” Filis said.

“The problem must be solved based on the [SYRIZA-Independent Greeks] agreement that we reached. Ideas about axes in the framework of a Balkan Cold War, which I heard Mr. Kammenos talk about, lead us back to the bad period of Balkan history,” he concluded.