The Coast Guard announced today that it confiscated 1,133.420 kilos of heroin as a result of a combined operation that took place in Attica… 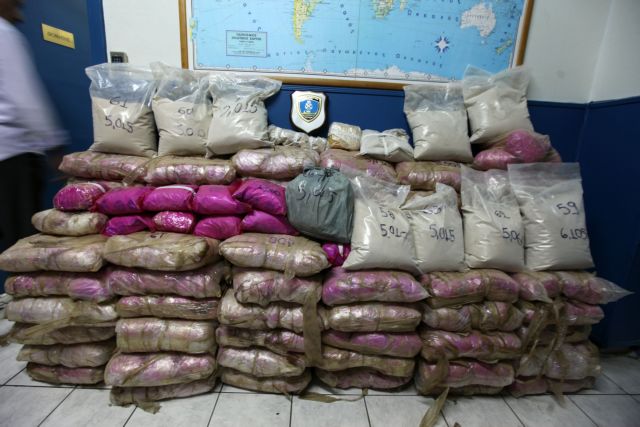 The Coast Guard announced today that it confiscated 1,133.420 kilos of heroin as a result of a combined operation that took place in Attica. This appears to be the largest quantity of heroin ever confiscated by the authorities in Greece.

Half of the heroin was found a warehouse in Koropi, where it was being packed into sacks of marble powder so that it could be transferred to other areas in Greece and abroad. The Coast Guard arrested 11 suspects, five of whom are Turkish nationals and one is under age.

During the investigation in the warehouse, the authorities were informed of more being stored in the luxury home of a shipowner in Philothei. The authorities then searched a villa in Philothei, from where they recovered the other half of the confiscated heroin.

The shipowner, who is to own four tankers in Dubai, appears to be involved in the case along with his former wife and his son. The three of them have also been arrested.

Aside from the heroin, the Coast Guard also recovered 5.1 grams of cocaine, one pistol loaded with 9 rounds and 6,235 euros in cash.

For the purposes of the operation, the Coast Guard cooperated with the Police’s Drug Enforcement department, the American DEA and the Narcotics and Weapons Division of SDOE.

The Minister of Shipping Miltiadis Varvitsiotis congratulated the officers who participated in the operation and welcomed the support the Coast Guard received from the Hellenic Police and the American agency.