Samaras vows to reduce rate of unemployment by 10 points, by 2018 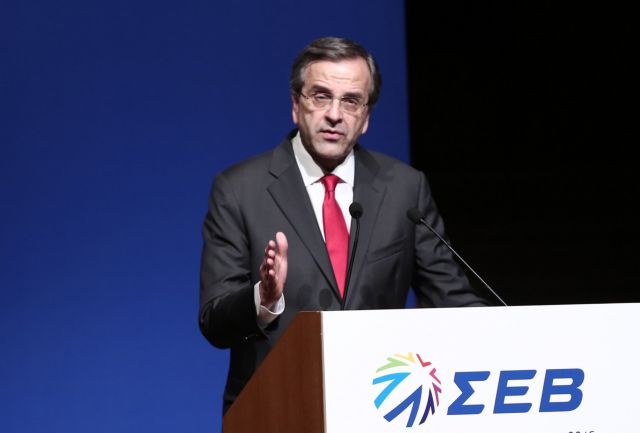 The Prime Minister Antonis Samaras denied any dissonance between the people’s will and parliamentary representation and cited the June 2012 election results., thus responding to Alexis Tsipras at the annual SEV meeting on Wednesday evening.

Mr. Samaras however admitted for the first time in public that the coalition government “suffered a reduction at the European elections”, but noted that SYRIZA also received less votes since the June 2012 elections. Mr. Samaras argued that the people voted against the opposition because “the overwhelming majority of Greeks despise an absence of government”.

Politics aside, Mr. Samaras claimed that Greece is entering a growth phase after six years of recession and that the rate of unemployment would drop by 10 points by 2018. Mr. Samaras predicted that there would be a 2.9% growth rate in 2015 and 3.7% in 2016, with the rate of unemployment set to drop bellow European averages by 2020. Mr. Samaras repeated also his plan to reduce all taxes but added that this could not happen immediately, before deriding SYRIZA’s recovery program.