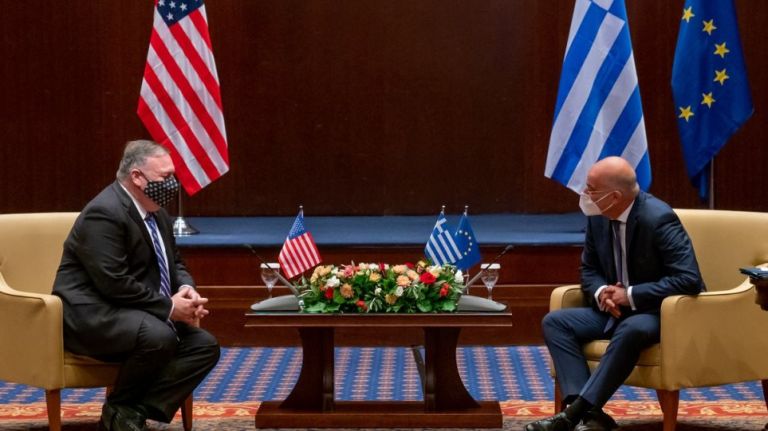 The Eastern Mediterranean was high on the agenda of Pompeo’s talks as Greece, the US, France and other nations have slammed Ankara’s military moves in the region, as were Turkish Aegean provocations.

US Secretary of State Mike Pompeo and Greek Foreign Minister Nikos Dendias held talks today in Thessaloniki on the full range of issues of bilateral, regional, and international interest.

The talks focused on the Greece-US strategic partnership, defense, and energy cooperation.

Pompeo will next visit the US air and naval base in Souda Bay Crete, which the US plans to expand and strengthen significantly.
That visit is widely viewed as a message urbi et orbi that the US has no intention of ceding its dominant position and interests in the Eastern Mediterranean, where Turkey has launched an intense power play directly claiming hegemony.

In a break with US diplomatic custom that if a Secretary of State visits Greece he or she will also visit Turkey and vice versa, Pompeo decided to visit only Greece.

Analysts saw the move as an expression of Washington’s deep consternation about Turkey recent geopolitical moves, which also includes a tight embrace with Moscow.

Developments in the wider Eastern Mediterranean region were high on the agenda of Pompeo’s talks with Dendias as Greece, the US, France and other nations have expressed consternation over Ankara’s military moves in the region, including around Cyprus, and Ankara’s breach of the Arms embargo against Libya.
In a tweet shortly before leaving Washington on Sunday, Pompeo, who is the first US Secretary of State to visit Thessaloniki, said, «Back on the road and heading to Europe to reinforce our strong bilateral relationships and the importance of sustained regional cooperation. First stop: Thessaloniki, Greece.»
During his visit to Thessaloniki, Pompeo’s schedule included participation in a round table discussion on energy attended by Environment and Energy Minister Costis Hatzidakis, followed by the signing of an agreement on scientific and technological cooperation between Greece and the US with the competent Development and Investment Minister Adonis Georgiadis in attendance.

The last stop on Pompeo’s visit to Thessaloniki was a visit to the Jewish Museum.

After Thessaloniki, Pompeo will travel to Crete, where he will visit the geostrategically crucial US Souda Bay Naval Base to underline the strong US security partnership with Greece.

Reports have indicated that Washington, because of heightened tensions with Turkey and mounting distrust, is considering moving many of its facilities from Turkey’s geopolitically important Incirlik base to Crete, though no firm decisions have been announced as yet.
US-Greece joint statement issued, comprehensive overview of ties

On the occasion of Pompeo’s visit to Greece a US-Greece joint statement on areas of Strategic Cooperation between the two countries now and in the future was issued.

The full text of the joint US-Greece cooperation in various areas is as follows:

The United States and Greece shared views on the Eastern Mediterranean and reaffirmed their belief that maritime delimitation issues should be resolved peacefully in accordance with international law. In this regard, the United States welcomed Greece’s confirmed readiness to engage with other countries in the region to achieve maritime delimitation agreements through dialogue and in accordance with international law. The United States and Greece also reiterated their dedication to enhancing their close cooperation as NATO Allies, using all appropriate means at their disposal, to safeguard stability and security in the wider region.

The two sides reiterated their desire to continue and strengthen their cooperation in various sectors in the framework of the 3+1 format (Cyprus, Greece, Israel, and the United States), which was launched in Jerusalem in March 2019, as this partnership can contribute to the promotion of peace, stability, security, and prosperity in the Eastern Mediterranean and the wider region. The United States and Greece reiterate their support for the integration of all the countries of the Western Balkans into European and Transatlantic institutions according to the choice of their citizens. They highlighted Greece’s efforts to this end, noting the continued relevance of the Prespes Agreement and North Macedonia’s subsequent accession to NATO, while underscoring the importance of its consistent implementation in good faith.

Greece and the United States expressed their intent to further enhance their strategic defense and security partnership by expanding and deepening the U.S.-Greece Mutual Defense Cooperation Agreement, which was last updated in October 2019 and greatly contributes to the security of both nations. In the coming Strategic Dialogue, both sides intend to discuss how to further assist each other in maintaining strong, capable, and interoperable militaries.

The United States and Greece took note of their security cooperation based upon a shared interest in protecting the safety and security of both nations from terrorists, transnational criminal organizations, and other threat actors. Despite the global pandemic, outstanding U.S.-Greece law enforcement cooperation on arrests, seizures, and extraditions has continued unabated.

Moreover, the two countries took stock of continued improvement in border security and counterterrorism information sharing and collaboration according to international standards. They committed to full implementation of the 2016 Joint Statement on Greece’s participation in the Visa Waiver Program, including beginning issuance of an updated national identification card and fully collecting and analyzing air passenger data.

The United States and Greece look forward to enhancing trade and investment between our two countries. The two governments noted that Greece substantially improved its protection and enforcement of intellectual property in 2019, which resulted in Greece’s removal from the Office of the United States Trade Representative’s Special 301 Report this year. The United States and Greece welcomed the inauguration of new investments and acquisitions by U.S. companies in Greece and reaffirmed their commitment to encourage that trend. The two governments look forward to increasing cooperation on trade. The United States and Greece attach great importance on the cooperation on artificial intelligence, cyber security, 5G, and privatization of strategic infrastructure. The two countries remain committed to enhancing the capacity of women to prosper in the workforce, succeed as entrepreneurs, and be better positioned to foster economic growth.

The United States and Greece welcomed the completion of the Greek section of the Trans Adriatic Pipeline and looked forward to discussing at the coming Strategic Dialogue their mutual support for the Interconnector Greece-Bulgaria, the floating storage regasification unit project at Alexandroupoli, the privatization of the Kavala underground gas storage, the Interconnection Greece – North Macedonia project, and other commercially viable projects, which could include the EastMed Gas Pipeline.

Both sides welcomed the September 22 formal establishment of the EastMed Gas Forum as a regional organization and the ongoing successful cooperation on energy through the 3+1 process. Greece and the United States underlined the participation of ExxonMobil in partnership with Total and Hellenic Petroleum in offshore exploration blocks off the coast of Crete, as well the potential opportunities for U.S. investment in the renewable energy sector, with the recently ratified Greek Law “ Modernization of Environmental Legislation.”