Party leader StavrosTheodorakis recommended that the party not run in the upcoming parliamentary elections but said he will make that decision after consulting with party cadres nationwide. 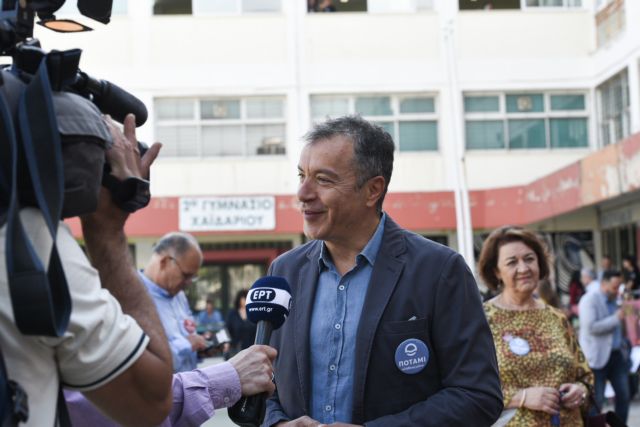 Five years after founding the centre-right To Potami (River) party in March, 2014, Stavros Theodorakis has announced his intention of resigning after the party’s disastrous showing of 1.5 percent of the vote in the 26 June European Parliament election.

Though a parliamentary party, it finished in ninth place.

Theodorakis made the announcement today at a meeting of the party’s executive Political Council and reportedly nominated as his successor party VP Yorgos Mavrotas, an associate professor at Athens Polytechnic and a former championship water polo player who played on the national team at the 1984 Los Angeles Olympics.

Theodorakis recommended that the party not run in the upcoming parliamentary elections but said he will make that decision after consulting with party cadres nationwide.

That suggests that he will stay on as leader at least until the 7 July general election.

Theodorakis said that if the party does not run autonomously its members will not run on the ticket of any other party.

That could well mean its dissolution.

The party had cultivated a reformist image with an emphasis on liberal principles, meritocracy, and a restructuring of the productive base of the economy with a focus on agriculture, renewable energy sources and tourism.

A well known television journalist who for many years worked for Mega Television, Theodorakis’ endeavour was viewed with suspicion at first as it was speculated that he represented the vested interests of the major broadcasters’ shareholders.

He was soon able to establish the party as an authentic exponent of much-needed but often deeply unpopular reforms.

In the May, 2014 European Parliament election To Potami garnered 6.6 percent of the vote and elected two MEPs.

In the January, 2015, general election that swept SYRIZA to power, the party placed fourth with 6.1% of the vote and picked up 17 parliamentary seats.

In the September, 2015 general election To Potami garnered 4.1%, of the vote and received 11 seats in Parliament.

For years To Potami has been racked by intra-party strife with a number of cadres accusing Theodorakis of a less than inclusive leadership style.

Four MPs left the party in 2016 and one was expelled. Some went to New Democracy and others to Pasok.

In July, 2017, To Potami participated in an effort to forge a broader progressive alliance with Fofi Gennimata’s Democratic Alliance and in September he made a failed bid for the leadership of the nascent Democratic Alliance, placing fourth with 10.9 percent of the vote.

Having participated in the effort to create what became the Movement for Change, a party convention in July, 2018, followed Theodorakis’ recommendation to leave the Gennimata-led coalition and ply a solitary course.

In 2018 and early 2109, internal disputes over the Greece-North Macedonia Prespa Agreement was the coup de grace as it led to the departure of three MPs (one expelled) and the dissolution of its parliamentary group (as it had fewer than the requisite five MPs).