The German Chancellor again weighed in to support the Greece-FYROM aaccord in a letter to FYROM’s Prime Minister Zoran Zaev. 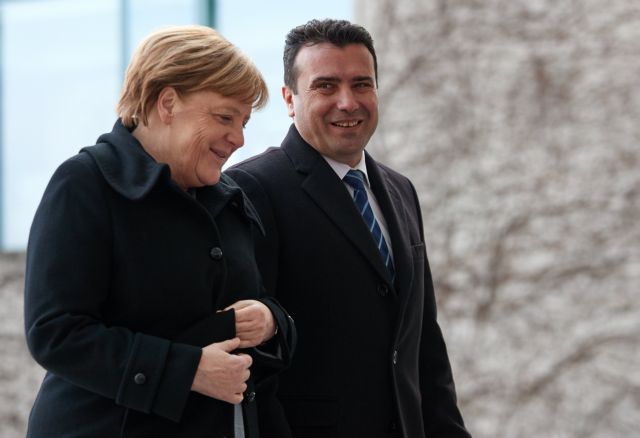 epa06549489 (L-R) German Chancellor Angela Merkel and Prime Minister of the former Yugoslav Republic of Macedonia Zoran Zaev walk side by side during a reception with military honors at the Chancellery in Berlin, Germany, 21 February 2018. According to the media, Merkel's meeting with Zaev was agreed during the forum in Davos. EPA/HAYOUNG JEON
Share

With intensive consultations and preparations underway in Skopje for a parliamentary vote on the constitutional amendments required by the Greece-FYROM Prespa Agreement, German Chancellor Angela Merkel again weighed in to support the accord in a letter to FYROM’s Prime Minister Zoran Zaev, which was obviously intended for a larger audience.

In it, Merkel indirectly urged political forces in Skopje to approve the required constitutional amendments.

The text of the German Chancellor’s letter is as follows:

“On 30 September a vast majority – over 90 percent – of those who took part in the referendum voted in favor of the agreement with Greece. The agreement offers an opportunity for a historic deal and for strengthening the relations between the two countries. It also eliminates the key obstacle for the country’s accession to the European Union and NATO.”

“Now it is crucial for the country to take very significant steps for implementing the name agreement by an adoption of the necessary constitutional amendments. I’ll continue to cooperate with you for realization of this goal.”