PM Tsipras: “The choices were an agreement or a disorderly bankruptcy”

In a Wednesday evening interview on public broadcaster ERT, the Prime Minister Alexis Tsipras commented on the controversial… 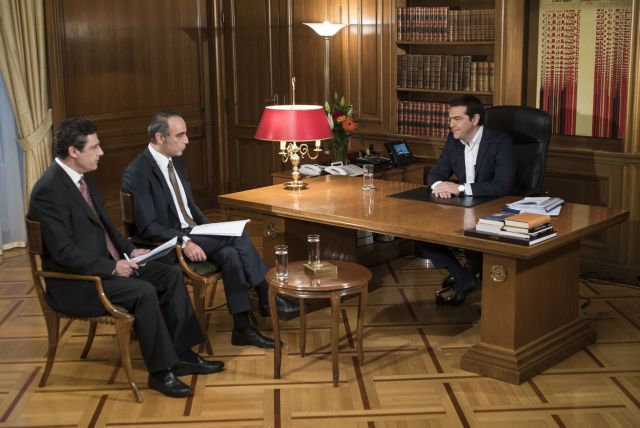 In a Wednesday evening interview on public broadcaster ERT, the Prime Minister Alexis Tsipras commented on the controversial agreement reached with Greece’s creditors in Brussels. The Prime Minister underlined that Greece’s partners adopted a hard and vindictive stance towards Greece, but noted that the agreement will provide a solution to the country’s short-term needs, recapitalize the banks and restructure the public debt.

Mr. Tsipras explained that the 82 billion euros over three years (of which 35 billion will go towards investments) will help set aside the possibility of a ‘Grexit’ and compensate for recessionary measures. The options which he was presented with in Brussels, he noted, were to either come to an agreement or face a disorderly bankruptcy.

The Prime Minister conceded that certain aspects of the agreement were unjust or problems – such as the VAT hike on food, catering and restaurants – but estimated that the deal provided some prospect and provides a milder fiscal adjustment. Mr. Tsipras commented on the changes in the pension system and stated that a battle was given to support low pensions.

While many of the provisions are controversial and problem, Mr. Tsipras explained that there is the ability to replace them with alternative measures and stressed that he fully accepts his responsibilities regarding any mistakes and omissions and pledged to try to implement his political plan within his term. He also stressed that he would do everything within his power to keep his party and parliamentary group united.

The Prime Minister revealed that when he decided to carry out the referendum he was under the impression that an extension would be given, however that it was not given and he noted that the country’s partners adopted a “vindictive stance” towards Greece. The PM argued that the partners do not care about who is charge in countries that are in a program.

According to the PM, the German Minister of Finances Wolfgang Schäuble had first suggested a Grexit “in March or April”, but explained that Greece did not have the necessary foreign exchange reserves in order to support a return to the drachma and as such, would be facing a disorderly bankruptcy. A Grexit under these conditions, he added, would be fatal and he revealed that there was no plan for a departure from the euro. In his meetings in China and Russia he did not receive support to pursue such an option.

The Prime Minister concluded his interview by asserting that the banks would reopen after the agreement is ratified and that the capital controls and caps would gradually be lifted. He stressed that he will respect the stance of the members of parliament and denied plans of a ‘special purpose’ government, stating that “a Prime Minister must take decisions, not escape: in a storm, the captain does not leave the helm”.