Koutsoumpas: “SYRIZA has opted to go against the people’s interests” 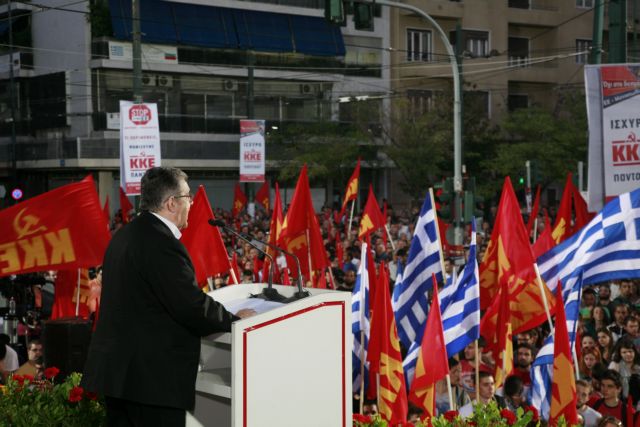 The general secretary of the Communist Party Dimitris Koutsoumpas gave a speech in downtown Athens on Thursday evening where he condemned the other parties of “political games and deals”.

Mr. Koutsoumpas was particularly scathing in his criticism of opposition leaders SYRIZA, which he accused of pandering for votes and for “recruiting leading members of PASOK who are specialized in scams”. According to the KKE leader SYRIZA has chosen to align itself with the EU and NATO, the huge business groups and interest dealers.

The general secretary later explained that only the Communist Party can “tackle the neo-Nazi Golden Dawn” and argued that more aggressive efforts are necessary to reveal the “association of Nazism with the system”. Mr. Koutsoumpas warned that minorities have been used as pawns in the imperialistic competition and called for the people to be weary of vague minority reports.

The Communist Party leader insisted that A new “Annan plan” for Cyprus “perhaps worse than the previous one” was being devised and warned that with Turkey expanding its influence In the Middle East, Balkans, Caucasus and Syria, there was the risk of Greece being implicated in a military conflict “on the side of one imperialist coalition or another”.

Mr. Koutsoumpas repeated his party’s opposition to the European Union and NATO while stressing that the only realistic option is a unilateral debt cancellation, in conjunction with a nationalization of large industries and mining. Additionally, the general secretary claimed that irrespective of electoral result on Sunday, the Greek people will still be called upon to repay the bailout loans.