In a survey conducted by Lonely Planet for this year’s tourist season, US tourists’ interest in Greece is almost 5 times greater than last year 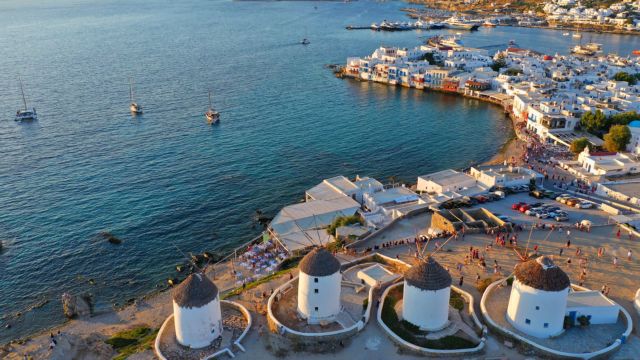 Mykonos is ready this year to recover lost time and lost revenue, as Andreas Fiorentinos, former president of the island’s Hoteliers Association and Head of Tourism for the New Democracy party, points out that all those involved in tourism on the island are waiting for a fertile tourist season. It is known that Mykonos along with Santorini are characterized as the most recognizable Greek destinations for international celebrities and generally for tourists from the USA and other parts of the world that can afford this type of vacation, adds Mr.Fiorentinos.

Focusing on the Easter period, it is emphasized that mainly Mykonos will be flooded by holidaymakers, namely those who have a house in Mykonos, while the hoteliers of the island, are ready to welcome significant flows of tourists, from the first week of May, when the hotel businesses of the island open, notes Mr. Fiorentinos. The hoteliers of the island are convinced that Mykonos will have a good season, the revenues of which will allow them to reach a satisfactory percentage of the 2019 record.

Currently, the expectations of the island’s entrepreneurs are based on the fact that the air links with the USA has been restored, with 9 flights per week. If another 4 flights weekly are added from Canada, then the expectations of the island for a record year in terms of revenue and arrivals are realistic. It is worth noting that in a survey conducted by Lonely Planet for this year’s tourist season, the interest of American tourists for Greece is almost 5 times greater than last year and especially for Mykonos the interest of tourists for the island is 11.6 times greater. Lonely Planet’s estimates of the Canadian market are in the same vein. It is estimated that, this year, the interest in Greece is 8 times higher than last year while, for Mykonos alone, it is 13.4 times higher.

Santorini: The island is ready for the tourist period

Ιn the meantime, the majority of tourist units in Santorini have also opened and expect to welcome significant flows of tourists from Easter. Speaking to the Athens-Macedonian News Agency, Mr Anastasios Nikolaos Zorzos, former mayor and winemaker at one of the island’s most visited wineries, after stressing that the island is ready for the Easter and summer season, he noted that the tourist season started well and estimated that Santorini will have a very good tourist year. He also stressed that many hotel units have opened and are already welcoming people.

In fact, Mr. Zorzos invited visitors to live and taste the products of the island and, at the same time, to travel in time visiting its archaeological sites. Santorini is not only the “Caldera”, noted among other other things. Finally, referring to the phenomenon of excessive concentration of tourists at certain times, he noted that if this year cruise ship itineraries are well organised there will be no issue.

Looking at the era of sustainable tourism development and tourism connections with other productive sectors of the national economy, Mr.Fiorentinos reminds that the political leadership of tourism has already taken initiatives for the holistic transition of the two emblematic islands, Mykonos and Santorini, to sustainability. In another model of tourist organization that will be the model for other regions of our country designed to upgrade the resilience of our tourism ecosystem, to contribute to the increase of revenues from tourism and to ensure the natural wealth of our places for future generations, Mr.Fiorentinos concludes.