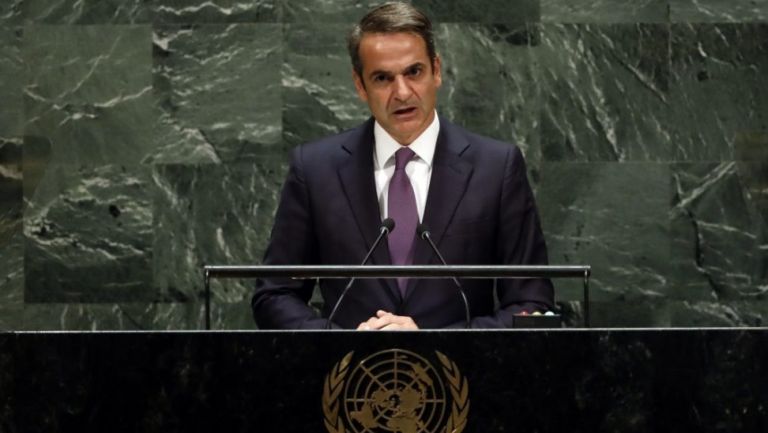 ‘What happened last year, when Ankara raised tensions, unnecessarily and without provocation, threatening confrontation between two NATO Allies, must not be repeated,’ the PM said.

As expected the PM devoted much of his address to Greek-Turkish relations, noting that Athens wants good relation with Ankara based on international law.

He stressed in that regard that in confronting any challenge from Turkey Greece will defend its sovereign rights.

Mitsotakis said he was less optimistic about a solution for the Cyprus problem due to Turkey’s stance.

The full text of the PM’s speech is as fo llows:

For nearly two years the world has been grappling with one of the greatest challenges we have faced in modern times. The impact of COVID-19 is an ever-present reminder of the realities we continue to face in the battle against this pandemic.

But as we gather here this week, I believe that, in spite of the pain and disruption brought about by this terrible disease, there are reasons to be optimistic. If these events have taught us anything, then it is this: that hope is born of co-operation.

For the first time in human history our planet joined hands and delivered a collective scientific miracle.

The discovery, development, and production of not just one but several safe and effective vaccines, in a very short period of time. What in the past took us decades was now achieved in months.

And Europe led the way on numerous fronts.

We led the way on vaccine procurement. Vaccines were purchased by the EU and distributed to all member states based on their population, regardless of size and economic might. A true act of solidarity.

We led the way on vaccine donation to countries outside the EU: in Greece’s case 1.7 million doses so far, with 4 million more to come, to countries ranging from Iraq to Rwanda and from Libya to Jordan. Also, 510.000 doses through the COVAX Facility.

We agreed, last July on an unprecedented EU wide fiscal stimulus package, Next Generation EU, that is now driving a sustained economic recovery across the continent.

And we agreed on the development of the EU Digital certificate. An innovative concept that Greece proposed, the implementation of which has been central to the restoration of our freedoms, the support of tourism and the rejuvenation of our economies.

And as we stand here today – less than six weeks from the COP 26 conference in Glasgow – we continue to talk about the other great issue of our time, climate, with renewed sense of urgency. The question is whether we are capable of aligning our flowery rhetoric with the necessary action to avert a catastrophe of unimaginable consequences.

Let me be clear. This is no longer about climate change. This is about addressing a climate crisis.

Scientists tell us that the Mediterranean ecosystem, which is home to some of the world’s most ancient civilizations, is particularly susceptible to the consequences of rising temperatures.

And of course, Greece is not immune. This summer we paid a heavy price as unprecedented mega wildfires ravaged my country. And yet, help to fight the fires came from across Europe and beyond. I am deeply grateful to the 23 countries that sent us support to help us tame a natural phenomenon of ferocious intensity.

I am very pleased that last Friday, alongside Greece, the leaders of 8 other Mediterranean countries made the climate crisis the focal point of the 8th annual EUMED summit in Athens.

The Athens Declaration, adopted by Portugal, Spain, France, Italy, Croatia, Cyprus, Malta, Slovenia, and Greece, focuses on key areas of the climate crisis with particular relevance to the Mediterranean, including biodiversity, forest management; the marine environment; and civil protection, prevention and preparedness.

My country’s commitment to addressing the climate crisis is unwavering and it transcends all aspects of public policy.

2 years ago, before COVID struck, I announced from this very podium that Greece would shut down all its lignite (that is brown coal) fired electricity production plants by 2028. Now we are working to bring this date even sooner, to 2025.

We are investing 24 billion of European and national funds to support the Green transition. We are addressing the issue of plastics pollution on land and at sea. We intend to protect our marine environment by designating 10% of our seas as no-catch zones by 2030.

We are also implementing ambitious plans, in partnership with the private sector, to accelerate the use of green energy in our most sensitive ecosystems.

For example, on Astypalaia in the Dodecanese, we have begun a long- term project alongside Volkswagen to develop Europe’s first fully green island. And Greece is leading a global initiative that aims to accelerate action to protect cultural and natural heritage from the impacts of climate.

Let me turn now to the escalating complexity of international relations and our continued efforts to consolidate regional peace & security.

Since our last meeting and United Nations General Assembly, the Eastern Mediterranean has seen more days of instability than calmness.

While it is true there are diverging views between Greece and our near neighbor Turkey, Greece has always been committed to the rules and principles of international law and remains a strong advocate that disputes need to be settled peacefully, in accordance with the UN Charter.

Let me point out that it is the UN Charter which bans the use or the threat of force. However, since 1995 Greece has been facing a formal, regularly renewed and clearly illegal and unacceptable threat of the use of force by Turkey.

Furthermore, given that Greece is a maritime country made up of many thousands of islands and a coastline that stretches for more than 14 thousand kilometers, the longest in the Mediterranean, and as a global maritime power, we are fully committed to the Law of the Sea, as reflected in the United Nations Convention on the Law of the Seas.

We have recently signed, after many years of negotiations, delimitation agreements on our maritime zones with Italy and Egypt, and we have agreed with Albania to refer delimitation to the International Court of Justice.

This, I believe, is the best proof that disputes regarding maritime delimitations, no matter how complex and longstanding, can be resolved, provided we agree on a common rule book. And the only rulebook available is the that of international law of the seas.

It is that mindset that defines our approach to Turkey. We have always supported the need for open channels of communication and for cooperation between our two neighboring countries. What happened last year, when Ankara raised tensions, unnecessarily and without provocation, threatening confrontation between two NATO Allies, must not be repeated.

Turkey should understand that its aggressive attitude in this respect, undermines prospects for a mutually beneficial relationship, and jeopardizes regional security and stability. More than this, it makes Turkey’s relationship with Europe more complicated.

Let me be absolutely clear. We will continue to protect our sovereignty and our sovereign rights across our territory, on land, at sea, and in our airspace. At the same time, I will spare no effort to continue reaching out to Turkey to explore avenues of cooperation.

I have a vision for the Eastern Mediterranean: instead of fighting last century’s battles over hydrocarbons – a fading commodity – we have to join forces and cooperate against new common enemies.

Τhe climate crisis, which affects both our countries equally. But also, the threat of illegal migration, where Turkey has an important role to play in cooperating with us to eradicate the networks of illegal smugglers that prey on the desperation of vulnerable people.

There is much our two countries can do together. We are bound by history and geography to coexist. It is in our common interest to do so peacefully and prosperously.

Where I am less optimistic is on the issue of Cyprus.

It is regrettable that Turkey continues to ignore a series of UN Resolutions, amongst them 541 and 550, and insists on the militarization of the island. It continues its illegal violation of Cyprus’ maritime zones and airspace and violates UN resolutions on the fenced area of Varosha.

Greece remains fully committed to supporting efforts led by the UN Secretary General for the resumption – as soon as possible – of result-oriented negotiations for a viable solution of the Cyprus Issue.

And that solution can only be found on the basis of the UNSC Resolutions, which call for a mutually acceptable settlement of a bizonal, bicommunal federation, with political equality, a single sovereignty, a single international personality, and a single citizenship. Any talk regarding a two-state solution is simply unacceptable.

In our immediate neighborhood, Libya continues to suffer from the devastating effects of a decade long civil war. The Libyan people deserve a peaceful future, where their destiny is in their own hands, free from the presence of foreign troops, mercenaries, and foreign fighters.

Libyans want the right to freely elect their own government, without foreign intervention. We stand by them. And we support their demand for the withdrawal of all foreign forces and for the holding of free elections on December 24th, 2021. And we appreciate the work done by the United Nations and Special Envoy Jan Kubis.

I also want to briefly address the issue of the Western Balkans. Greece has always been an active supporter of greater European integration as a vehicle for a more prosperous, stable and democratic future for the region.

Ever since the adoption of “The Thessaloniki agenda” in 2003, that EU perspective has been the driving force for reform, democratization, and change. But there has also been fatigue and disappointment. 18 years is a longtime.

In a matter of days, the EU-Western Balkans Summit takes place in Slovenia. Let us not miss the opportunity to use that Summit to take a bold step forward. It is time for the EU to deliver.

Greece believes in a multilateral approach to the complex global challenges of today. But I am also a firm believer in the absolute necessity of Europe’s strategic autonomy.

Recent events have clearly demonstrated that we must be both willing and able to do more on our own. This should not come at the expense of our transatlantic bonds.

If anything, a European Defense Union will strengthen NATO. It will oblige European countries to address issues of interoperability and meagre defense budgets. It will accelerate our cooperation on cyber and space.

If Europe is to be not just an economic but a geopolitical powerhouse, it is time for this debate to start in earnest. And those countries most eager to proceed can do so at a faster pace.

Our strategic interests in the Eastern Mediterranean, in the Middle East, in the Sahel force us to address this challenge with a sense of renewed urgency. Because there will be missions where NATO or the UN will not be present, but where the EU should be.

Let me conclude by saying this.

Earlier this year Greece celebrated the 200th anniversary from the beginning of our war of independence. Our ancestors fought for freedom, dignity and respect for the rule of law. And they prevailed, against all odds, because they were doing the right thing for themselves and their children.

The challenges we are facing are no less formidable. Six thousand years of civilization and the futures of every generation to come rest on our shoulders.

Armed with the power of reason and science, and a determination to rise to the occasion, I am convinced we will also do the right thing. For ourselves, our children and the future of this fragile but beautiful blue planet humanity calls home.