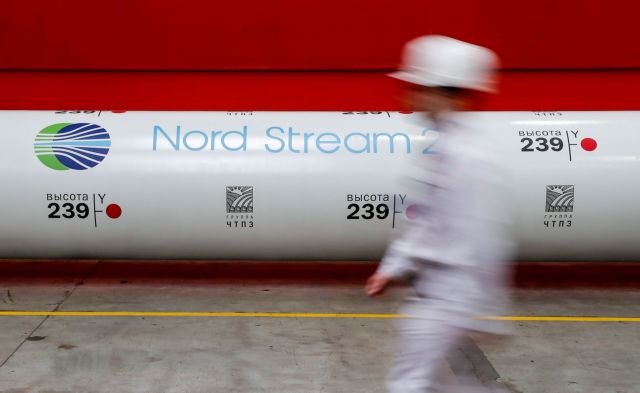 Mr Pyatt also commented on the completion of the Nord Stream 2 pipeline, stressing that it makes it even more imperative for the United States to work with its European partners on energy security through diversification.

Greece is a key partner of America in building the diversification of energy sources and routes in Southeast Europe, said the US Ambassador to Greece, Geoffrey Pyatt, in an interview with the Athenian-Macedonian News Agency on the sidelines of Southeast Europe Forum, yesterday, organized in Thessaloniki by the Hellenic-American Chamber of Commerce in collaboration with the American Embassy.

The US ambassador also commented on the completion of the Nord Stream 2 pipeline, emphasizing that it makes the US cooperation with its European partners for energy security through diversification even more imperative, while referring to the dynamics that have developed in the Greek-American relations, after the presence of the USA at the Thessaloniki International Fair in 2018 and the foundations it laid for American investments to come – and continue to come – to Greece.

On the occasion of the presence of four other American ambassadors from countries in the region at yesterday’s forum (Albania, Northern Macedonia, Bulgaria, Serbia), Mr. Pyatt underlined the regional dimension that has been given to cooperation in the field of energy independence. from the Russian monopoly but also the importance of cooperation in achieving this goal.

He also referred to the meeting that the American ambassadors had with the Minister of Environment and Energy Costas Skrekas, on the sidelines of the forum, and the discussion that took place about the challenges of the transition to RES, as well as the need to develop the connectivity of electricity networks. so that “when -for example- Albania has a deficit in its hydroelectric energy  it can draw electricity from other sources here in Greece, and vice versa during the summer in Greece, when there is increased energy demand, Greece can draw energy from its neighbors”. Nord Stream 2 and the “counterweight” of FSRU and TAP

Asked about developments with the completion of the Nord Stream 2 pipeline, which connects Russia and Germany and has provoked strong reactions from Washington, the US ambassador commented: “Nord Stream 2 makes even more important the close cooperation of the United States with our European partners to build energy security and diversification.”

He noted that the maximum number of alternatives should be sought and in the context of this process praised the role of Greece. “Projects such as Revythousa, the FSRU in Alexandroupolis, the TAP pipeline are making a critical contribution to Europe’s energy security and helping to curb the bad signals coming from Nord Stream 2,” he said.

The American ambassador also characterized as impressive the way in which the Greek government proceeded with the reforms, in the midst of a pandemic, a fact which, as he says, contributed to the attraction of new investments and the continuation of growth in the energy and other sectors.

“One of the things that is very impressive to me is the way in which Prime Minister Mitsotakis and his government continued the process of political reform even during the coronavirus crisis. This is why you saw this huge new investment by Microsoft in a data center in Attica. This is why other leading American technology companies are looking for opportunities in Greece, such as Amazon web services. That is why we continue to see growth in the energy sector. We have an American company, 547 (Energy), which is ready to become the largest private wind energy manager in Greece, especially in Western Macedonia “.

He expresses the appreciation that the sectors in which we are expected to see even greater deepening in Greek-American relations are those that are based on the success history that already exists. “Energy, high technology that utilizes the huge potential of human capital and human skills that our companies find here in Greece and of course the tourism sector. I am very excited to have Minister Kikilias with us here tonight (at an event at the US Embassy). We were talking just a little while ago about the strong record that Greece has set even this year COVID, a record with nine direct flights from the United States. In fact, everyone is committed to continue building on it and we hope that more American tourists will come here to northern Greece, to Macedonia, on the wine road, to Zagorochoria, to see everything that this side of the country has to offer “. Speaking to APE-MPE a few hours before the official opening of the 85th TIF, the American ambassador did not fail to mention the solid foundations that were laid for the further development of Greek-American relations by the presence of the US as an honored country at the 2018 International Exhibition and the dynamics created in terms of investment development. “I am extremely proud of how our team built on the foundations we laid in 2018 at the embassy. The embassy’s cooperation with the Hellenic-American Chamber of Commerce is stronger than ever and you have seen how we continue to build on this heritage in a number of different areas,” Payat said.

He referred to the US investment presence in northern Greece with Pfizer, Cisco, and Deloitte, but also to the cooperation that is developing in a number of areas such as education, to which he placed special emphasis. “Here in Thessaloniki, there is the largest concentration of students than anywhere else in Greece. “And I estimate that as we exit the COVID period, we will see many more American students coming to Greece and taking advantage of what Greece has to offer them, and I hope that Greek students will go to the United States and do the same.” .

At TIF with emphasis on innovation and women

The legacy of TIF 2018 and all that it has brought in the course of the three years that have passed until today, is brought by the United States with its presence in this year’s event.

“This year, at TIF 2021, we continue the legacy we created with the American high-tech stand. Again we have mentorship at Tech Camp focusing on building technological skills, but this year with a strong emphasis on women in entrepreneurship. “And I am very excited about this and very proud of what the embassy is doing in this area,” said the US ambassador to Greece.