Radmila Sekerinska: ‘The Prespa Agreement is a child born in a complicated marriage’

‘Nationalism brought to the Balkans only misfortune and suffering. It has been the silent killer of progress. If we fall prey to its deadly spell again – we won’t have anyone else to blame but ourselves.’ 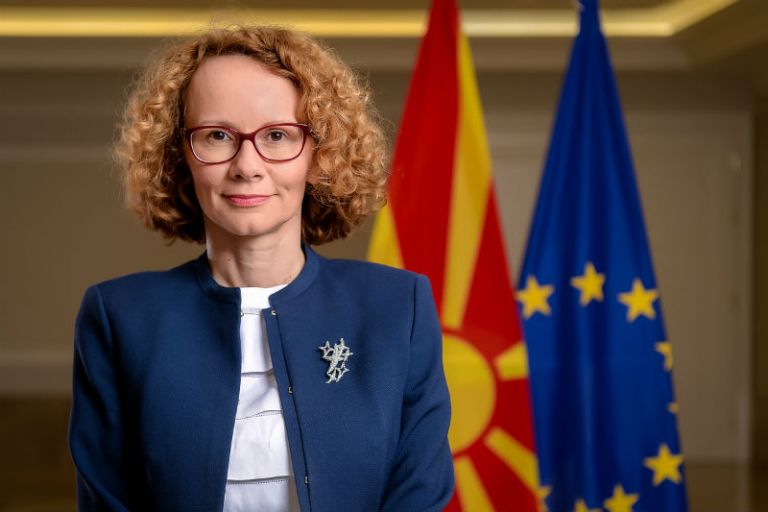 North Macedonia is determined to keep its word and implement the Prespa Agreement, the country’s Defence Minister, Radmila Sekerinska, said in an exclusive interview with To Vima, on the occasion of her arrival in Greece to attend the DEFEA defence fair.

Our neighbouring country’s Minister of Defence exemplifies the impressive upgrade of bilateral relations in the field of military cooperation and estimates that it can spill over into other fields.

Sekerinska underlined her disappointment over Bulgaria’s veto of North Macedonia’s formal opening of accession negotiations with the European Union.

It’s been three years since the signing of the Prespa Agreement. I would like to ask your opinion about the way the agreement is being implemented and what is your view about the latest complications. Many sides in Greece believe that Skopje is trying to avoid certain parts of its commitments. How do you respond? What moves need to be made in order to surpass this kind of obstacles in the future?

The Prespa Agreement is a child born in a complicated marriage, and which now both parents have to take care of and raise. That marriage, like any other, will have its ups and downs – but hopefully both parents will continue to do the right thing.

Getting to Prespa was like climbing a steep mountain. Its adoption in Parliament was like moving through a minefield, while our constitutional changes were a “make or break” moment for everyone involved. So, why should we expect that its implementation would be a “smooth sail”? Nevertheless, on the skepticism in Greece I would say let us focus on the substance, and not the headlines.

Our institutions are meticulous in the implementation, our positions were clear and straightforward even during strong attacks on the Agreement. To take one indicative example, we have just started issuing new passports with the name “North Macedonia” – way ahead of schedule, sooner than the Prespa Agreement has foreseen. This is a clear indication of our political will to honour our word and move forward. Needless to say, we expect and hope for the same from the Greek side.

It is my understanding that defence cooperation between Greece and North Macedonia is proceeding smoothly despite the latest events. Would you like to share with us some details on joint exercises, exchange of know-how and exchange of military personnel? Additionally, how is the air policing of North Macedonia’s airspace by Greek fighter aircrafts proceeding? Is the postponement of the ratification of the relevant MoU by the Greek Parliament affecting progress in this domain?

Our 2021 Bilateral Defence Cooperation Plan consists of 69 activities – 23 in North Macedonia and 46 in Greece, which is a clear signal for the new level of commitment to our defence cooperation. The emphasis is on special forces, parachute and divers training, cyber defence, and joint exercises. We also plan to contribute to the NATO Rapid Deployable Corps-Greece and to the HELBROC battle group, also led by Greece.

This May, we have held the largest military exercise since our accession to NATO, with important participation of US, Greek and Bulgarian forces. Our parachute units returned last week from training in Greece. The Hellenic Air Force F-16 fighter aircrafts are patrolling our airspace. This is definitely a new chapter in our cooperation and it should set the tone in other areas.

You are now the 30th member-state of NATO. What are the main benefits from this development? And what are the priorities in your relationship with the Alliance?

The NATO membership goal was uniting our country for almost three decades and after periods of crises, regional instabilities and domestic disappointments – the moment of NATO accession was a truly historic event for us. It is seen as a confirmation of our strategic orientation and a boost to our and regional stability. Even the invitation to join NATO (in 2019) brought dividends in terms of increased stability, improved credit ratings and significant increase of FDI.

Of course, most effects are visible in our defence and Army – through higher and improved defence spending, strong modernisation efforts and reforms. Our military integration is well on its way and should be completed by the end of 2021.

However, North Macedonia’s accession process has stalled due to Bulgaria’s reservations concerning mainly identity and language issues. Do you see any light at the end of the tunnel anytime soon? How does this delay affect the government and the economy?

I would be lying if I said there is no disappointment. The veto is a major blow not only to us, but also to the EU’s policy towards the Western Balkans.

It endangers the EU’s enlargement policy and recreates the walls of mistrust and antagonism between neighbours. Without a credible enlargement offer to the Balkans, the EU loses its leverage in a period when the region in dire need of one.

It seems that the Balkans, particularly the Western Balkans, are becoming again the focus of big players. Geopolitical antagonism is clear not only between the US, Russia or China, but even Turkey. Is the region safe from the return of bad old habits such as nationalism? Would you say that certain of these big players are trying to destabilise the region through various means?

The pandemic was a sobering slap in the face for the world. We were reminded that progress and well-being doesn’t come from speaking the same language or attending the same church, but from well-equipped hospitals and efficient healthcare. In the hospitals where the fight for life took place, some have prayed to their God, but all counted on the drugs to work and the medical experts to give their best.

Yes, the Balkans have had decades of experience with nationalism. Did its practice make people richer and happier? No! Did any country achieve rapid development? No. Nationalism brought to the Balkans only misfortune and suffering. It has been the silent killer of progress. If we fall prey to its deadly spell again – we won’t have anyone else to blame but ourselves. We should know better.