‘I do not think there is an area of public life that has not in some way benefited from Europe’s contribution. Economically, European funding left Greece with invaluable infrastructure…,’ the PM said. 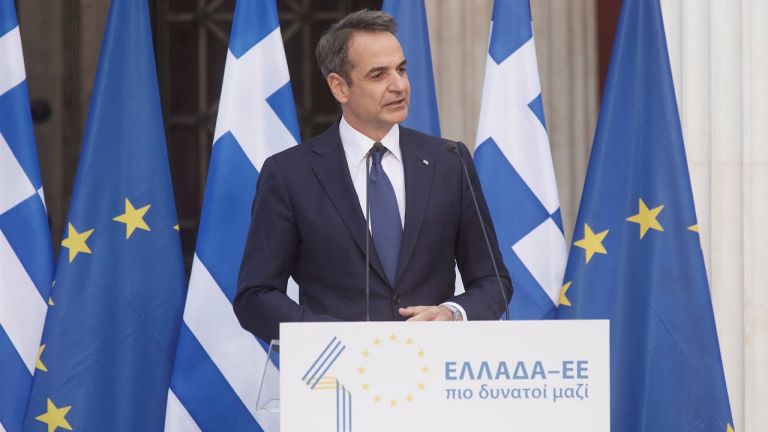 In his address marking the occasion, Prime Minister Kyriakos Mitsotakis outlined the history of Greece’s relations with the EU and the importance of membership in the country’s history.

It was the founder of Mr. Mitsotakis’s New Democracy Party, the late Constantine Karamanlis, who shepherded Greece into the European Community with the support of France and Germany.

“Since 1 January. 1981, Greece has reclaimed its place in Europe with which it has historical and cultural ties, common interests and objectives. With these words, [then PM] Constantine Karamanlis welcomed 40 years ago Greece’s accession to what was then the European Communities as their 10th member,” Prime Minister Kyriakos Mitsotakis said.

“That decision may have not met the strict, technocratic criteria [for membership] yet it addressed an historical necessity. That is why gradually the entire political spectrum with very few exceptions backed the linkage with Europe. Today that is a non-negotiable parameter of public life with political significance, national content, and long-term effect.”

“In short, I do not think there is an area of public life that has not in some way benefited from Europe’s contribution. Economically, European funding left Greece with invaluable infrastructure. It has for decades bolstered agricultural production and encouraged an exports-oriented approach. The lifting of tariffs necessarily oriented Greek production, services, and tourism towards competitive innovation. Commerce, services, and tourism now operate in a large, pan-European market,” the PM declared.

Mitsotakis in his address lambasted main opposition SYRIZA for supposedly bringing Greece to the brink of being expelled from the EU in 2015.
The then SYRIZA government held a referendum on the bailout package that was on offer and when the electorate rejected it, the government ignored the public verdict (the referendum is advisory) and SYRIZA along with New Democracy passed the bailout package in Parliament, with the ruling party losing a substantial number of dissenting MPs.

The PM underlined that the quest for a strong European Greece led to broader socio-political consensuses and thus upgraded the country’s political life.

“There was only one dark intermission with the divisive populism of 2015 when the country was a step away from falling off a cliff. There, again, progressive forces resisted and neutralised groundless slogans. They kept Greece in the EU and in the common currency and in the end they destroyed demagoguery along with the dual anti-European and anti-democracy lie – both the one with a left-wing façade and the far-right face of fascism and hatred.”

Mitsotakis ended his remarks with a personal message to the citizens of Europe.

“My fellow citizens of Europe, We can! We can positively meet the challenge of our generation. We can make our continent more green, digital, productive, just, and sensitive toward its residents – especially for the youth, whose concerns and dreams cannot be ignored. It is in our hand to make the coming years ones of revival with greater geopolitical weight for the EU. We want more cohesion in our societies and a common identity that combines European and national pride. We have to win this bet and we shall. Greece is moving swiftly into the third decade of the 21st century, even as it celebrates its bicentennial of freedom and the 40 years of its European course. It remembers that always in its sometimes tumultuous course it always turned to Europe in difficult moments. Europe was always there for Greece, just as Greece was and is here for Europe.”