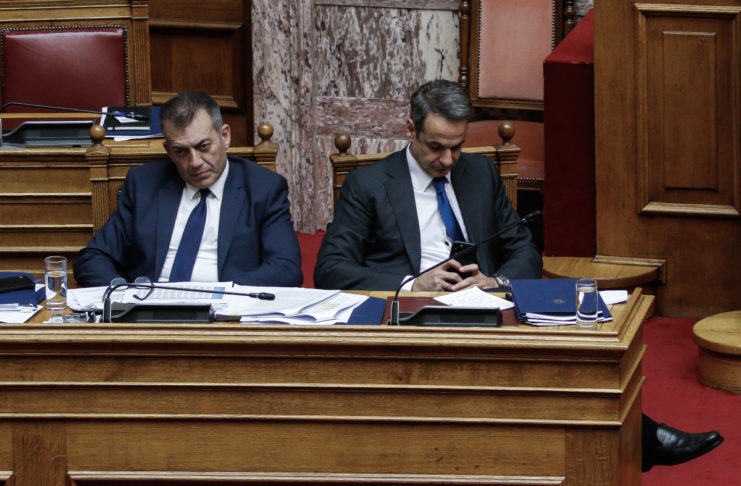 The New Democracy government has suffered its first serious political blow in its nine months in power after a general uproar forced Prime Minister Kyriakos Mitsotakis to scrap a voucher programme that would directly pay vocational education centres a handsome sum  from EU money for professionals and scientists to enroll in online continuing education-vocational training as a prerequisite for receiving 600 euros in financial aid.

Main opposition SYRIZA leader Alexis Tsipras and the centre-left Movement for Change (KINAL) are clamouring for the resignation of Labour Minister Yannis Vroutsis amidst allegations that the ministry was guided by patronage criteria in parceling out 80 million euros in EU funding to continuing education-vocational training centres to help professionals who have been hit hard by the crisis to adapt to the demands of the labour market ahead of possibly massive layoffs.

Tsipras slammed the government for ruling by legislative decree since late February even as regards issues unrelated to the pandemic crisis.

He spoke of a “scandal in the midst of a pandemic” and demanded that the PM come to parliament to offer an explanation.

Tsipras charged that the government has downgraded and circumvented Parliament – in order to avoid debate on SYRIZA’s proposals on handling the economic crisis, especially the idea that stimulus measures should be front-ended because delays could lead to a collapse of businesses which would cost the state much more – and has given itself a blank check.

The ministry decided to allocate the funding to continuing education programmes despite the fact that due to the pandemic crisis the EU for the first time has approved allocation of the 600-euro stipend directly to professionals (lawyers, engineers, and other professional groups which had not been given the 800-euro stipend, which is 25 percent more in aid, offered to many other categories of recipients with no strings attached) which is what the government will now do after the general uproar.

The allocation was not based on a qualititative evaluation of the programmes of the centres but rather, for the first time, based on the curriculums that they submitted.

The ministry essentially purports to have evaluated in the span of less than one day an estimated 100,000 pages of documents which were the basis for the selections of centres on seven different registration platforms, leading to allegations that the government had chosen establishments owned by party-affiliated owners based on prior arrangement, an accusation that has not for the time being been demonstrated.

What is known is that the call for vocational training centres to submit their dossiers and register was posted on the Diavgeia (transparency) state website on Thursday, 3 April, and the deadline was Sunday, 6 April, and the selections would be announced the next day.

The opposition charged that the entire procedure was stilted and an insult to professionals.

A questionnaire that applicants were asked to fill out according to some critics appears to have in some instances translated by Google into Greek.

That led to the questionnaire featuring veritable babble, such as the non-existent phrase “skoil elikikou” and various non sequiturs and grammatical errors, which went viral with sarcastic remarks and barbs against the government.

The story was brought to light in a scoop of the centre-left pro-opposition daily EFSYN but it was the general outcry and a tsunami of acerbic criticism in the social media that cornered the government.

Aside from ordering that the voucher programme be scrapped the PM ordered  a general investigation of the operation of vocational training centres which for years have been accused of receiving state and EU funds without transparency and with an educational offering that many believe is often of dubious quality.

The government’s line has been that it should be credited with rapidly correcting a mistake.

It is as yet unclear whether the PM will demand the resignation of his labour minister although it is clear that the incident marred the government’s image at a time that it is garnering international kudos for its model management of the public health aspect of the coronavirus crisis.