‘Late last night #Frontex received a request from the Greek government to launch a rapid intervention at its external borders. We are looking into how to best support Greece in the shortest time possible,» Frontex tweeted today. 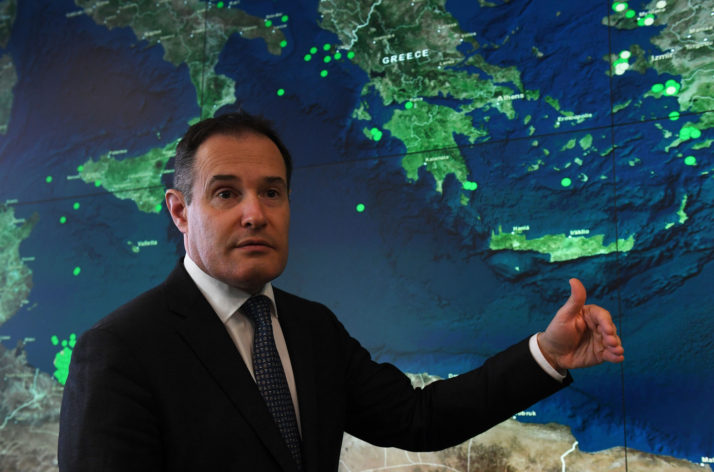 Just one day after the Greek government’s 1 March decision to request immediate EU assistance in guarding the country’s eastern borders, FRONTEX approved deployment of its RABIT rapid action force to guard the Greek and European borders from a major wave of migrants from the Turkish coast.

“Late last night #Frontex received a request from the Greek government to launch a rapid intervention at its external borders. We are looking into how to best support Greece in the shortest time possible #EuropeanBorderGuard,” Frontex tweeted on 2 March.

In a statement the same day the decision of the executive director of Frontex, Fabrice Leggeri (photo), outlined framework and scope of the mission:

“The Executive Director of Frontex has agreed today to launch a rapid border intervention to assist Greece in dealing with the large numbers of migrants at its external borders. The Greek government officially asked Frontex last night to launch a rapid border intervention at its sea borders in the Aegean. Given the quickly developing situation at the Greek external borders with Turkey, my decision is to accept to launch the rapid border intervention requested by Greece. It is part of the Frontex mandate to assist a Member State confronted with an exceptional situation, requesting urgent support with officers and equipment from all EU Member States and Schengen Associated Countries.”

“Starting next year we will be able to rely on the first 700 officers from the European Border and Coast Guard standing corps to provide operational flexibility in case of a rapid border intervention. Today, we depend entirely on EU Member States and Schengen Associated Countries for contributions to come through at this crucial time,” he added.

Frontex engaged with Greece since 2006

In a memo issued exactly nine years ago, on 2 March 2011, FRONTEX (established in 2005) outlined its purpose and involvement in guarding Greece’s borders at the time.

According to Frontex, by a letter dated 24 October 2010, Greece called for European solidarity and for further European assistance in the field of border operational cooperation. Greece requested the assistance of Rapid Border Intervention Teams indicating that despite its efforts and its ongoing collaboration with Frontex, it is facing an exceptional pressure due to the large number of persons crossing the border irregularly every day. The RABIT mechanism aims to provide rapid operational assistance for a limited period of time.

“During the operational period – lasting from 2 November 2010 to 2 March 2011- every week close to 200 well-trained guest officers from 26 Member States assisted their Greek colleagues in controlling the border areas as well as in identifying the apprehended irregular immigrants. The operation has also helped the Greek authorities in gathering information on the migration routes and facilitator networks which exploit the desperate situation of irregular immigrants.

“The deployment of the RABIT at the Greek-Turkish border has stabilised the situation and brought down the number of arrivals compared to the peaks in 2010. Since the RABIT operation was launched at the beginning of November 2010, a gradual decrease in the flow of irregular entries has been witnessed at the relevant border sections between Greece and Turkey. In October, prior to the operation, there were a total of 7 607 persons detected at the Greek-Turkish land border. In November, the operation reported a total of 4 616 detected entries and for the month of December, these detections had fallen further to 3 413. Subsequently, they decreased to 2 266 in January 2011 and to 1 632 in February 2011. Since the deployment of the RABIT operation, the numbers of irregular crossings have dropped by approximately 75 %. To put these divs into perspective, the total number of detected entries for the entire year of 2010, as reported by Greek authorities through the Frontex Risk Analysis Network, amounted to 47 706 detections.

“Frontex has been providing operational assistance to Greece at its external land and maritime borders through various operations since 2006. The RABIT operation built upon the then ongoing Poseidon Land 2010 joint operation by reinforcing the number of the guest officers and assets deployed along the borders. The Poseidon Land 2011 joint operation being launched right after the end of the RABIT operation will ensure continuity in effectively controlling the Greek-Turkish border, as well as in preventing irregular immigration in the Eastern Mediterranean region. It will be a permanent operation covering the remaining period of 2011. The geographical coverage of this operation will be extended to the external land borders between Bulgaria and Turkey.”

“Poseidon Sea 2010 was a permanent operation in which 26 Member States participated. It was carried out at the maritime borders at the Aegean Sea. The strengthened maritime controls had a strong deterrent effect (23,700 detections in 2009 – 6,600 detections in 2010 at the sea borders) but also resulted in a shift of the migratory routes to the land borders. The RABIT operation has addressed effectively this phenomenon.”