Very serious charges regarding all that transpired at Toumba stadium on 7 December during the game between commonly owned PAOK F.C. and Xanthi F.C. (2-0) were aired on One Channel 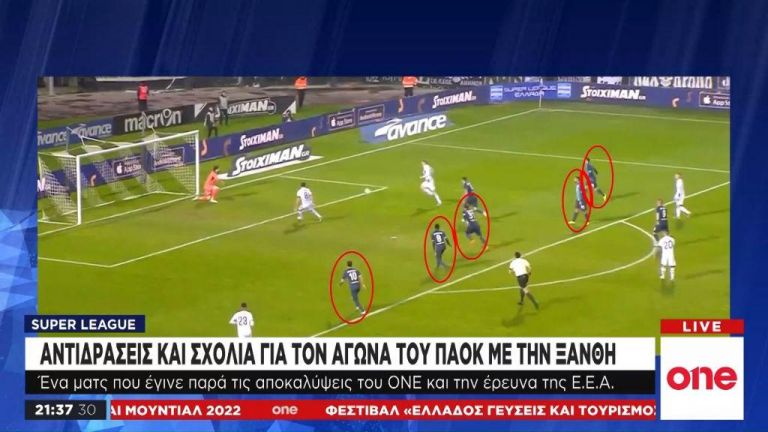 Officials, coaches, and veteran players did not mince their words in commenting on all that is happening that entirely distorts the Super League1 Championship.

In any regular country operating under the rule of law these self-evident truths would have been respected. Following the shocking revelations of One Channel about the links between PAOK and Xanthi this Championship match should not have taken place.

From the beginning of the investigation conducted by the Committee of Professional Sports it has been confirmed that there is a «triangular relationship» of partners who have essentially placed the two football clubs under the same business umbrella, namely that of Ivan Savvidis.

This case poses the threat even of demotion to both football clubs according to Greek sports legislation.

The harm to the credibility of Greek championship games is already enormous and the match in Toumba complicated matters even more. There was a sense of awkwardness in the atmosphere that any normal and calm observer could sense.

This brings new “heavy shadows”’ in a situation that is already unbearable and the reaction of the football world says it all.

Everything that happened in the 2-0 PAOK-Xanthi match was beyond reason. It raised a storm in social media, which are the true poll of the athletics audience.

Moreover, the match led persons associated with football, officials, coaches, and veteran players to freely speak their mind about what they saw.

Another revealing report aired on One Channel adds yet another piece of the puzzle to situation that is already shameful. This is the true image of the supposed clean-up of Greek football.

All this transpired over a match between a Club that won last year’s championship shares the league’s top position and the team that came in third.

What would have been expected to be a derby was turned into a bad theatrical performance with one protagonist.

Xanthi was a shadow of its former self. A team that was distinguished for its dynamism and its ability to fight hard in the game finished the 90 minutes match with seven fouls – three fewer than PAOK which had focused on offence.

Xanthi (also known as Akrites) gave away fifteen corner kicks without winning even one in order to save face. It received 22 final attacks and made only four, all of which were without substance. It never attempted to go into the offensive, even after the the 80th minute when PAOK scored the first of two goals.

The phases that highlighted Xanthi’s threadbare defence in Toumba were characteristic.

In the 23rd minute unhindered PAOK players threatened from the corner the poor defence of the guest team. 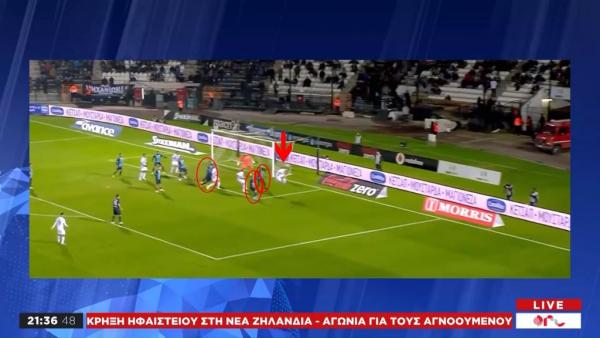 In the 51st minute, Swidersky took the rebound and scored, but he started his move from an offside position. The impressive thing is how all of Xanthi’s defence players were stuck to the line of the penalty area without following Abad’s successful first reaction as if they had had VAR and knew that the Polish offensive player’s goal would be declared  offside. 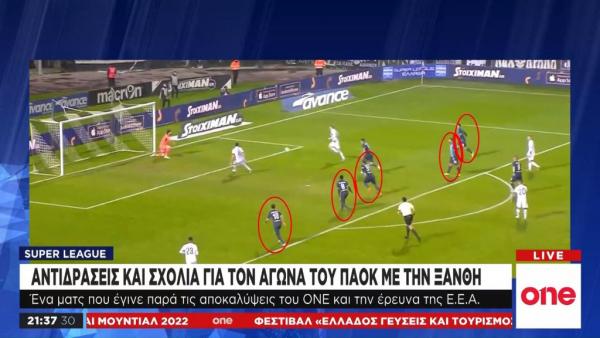 In the 58th minute – as if they were motionless statuettes in the yard of some primary school – the hardcore defensive players could not stop the pass to Yannoulis who ran to the clearing and reached Abad unimpeded. 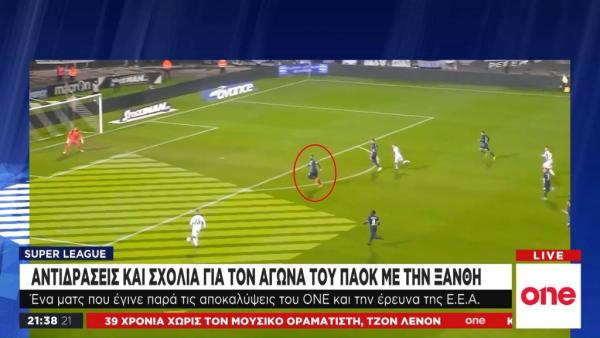 At the 80th minute despite the massive defence, Xanthi’s players supposedly did not see Biseswar who made a move in the goal area and side-footed with Abad fending it off and Liogara surprised – resulting in the Dutch player scoring in an empty goal post as if it were a practice game. Hence 1-0. 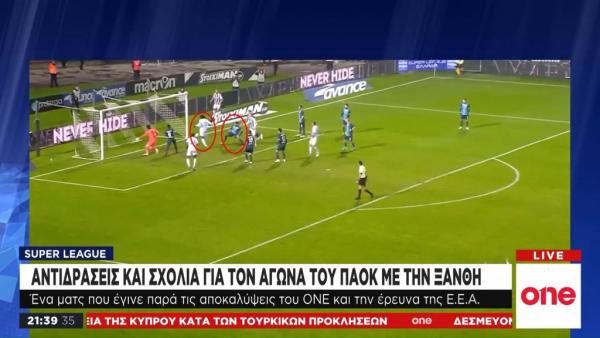 Similarly, in the 88th minute Crespo scored from the heart of the guest team’s defence as if it were just a practice game.

Reactions to the game

Let us see the reactions of divs in the world of football who spoke to One Channel about the PAOK-Xanthi mach.

Koutoulas: As if they were playing in academies

“There are certain things that we should understand on our own. I have always been a person who never believed in such things but now we will start to having a different opinion. When you have so many phases and so many goals that were rejected by the referee it ends up looking as if they were playing in academies. This is not professional level,”, Yorgos Koutoulas, a  defence player who made his mark on AEK told One Channel.

«What is there to say? There was no chance of PAOK not winning. In the 80th and the 90th minute PAOK would have won. We have been in football for years. Can they tell us such things now? In the 90th minute PAOK would have won. Certainly there were phases in which one would have scored. Let us not waste our time with such an issue. Should the Committee convene as soon as possible and make a decision now, or after the Championship has ended?  It  is commonplace here to issue decisions after the end of the Championships when it is pointless. Nowhere in the world has one team purchased the training centre of another team. Nowhere. Find me one team that has done that. Yet, for some these are just details,» said Nikos Anastasopoulos.

Karavitis: When you play with your subsidiary

When you play with your subsidiary, that’s the way it goes. I believe that the investigation must dig deeply in Greece in order to examine whether what Olympiacos’ accusations are true. I think that the evidence we have seen until now is unchallengeable. Whether PAOK yesterday had played in Toumba or Xanthi the result would have been the same. Did Lisgaras, who unfortunately had also played for Olympiacos in the past, actually play yesterday? I only saw him performing with Olympiacos,» said Petros Karavitis, one of the top Greek defensive players.

Similarly. Michalis Kopitsis remarked, «The issue is to solve this problem and to know that every result is crystal clear, to know that each team relies on its performance on the field. That would benefit all teams and the Championship.» 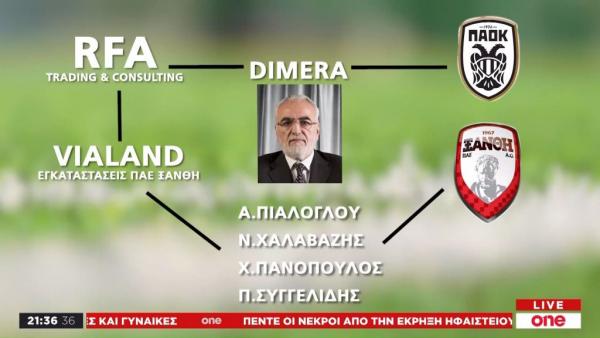 Kougias: Xanthi was a punching bag

What do the owners say? What do people who have been eyewitnesses to the tampering with a Championship in which they have invested their money and dreams have to say?

The owner of AEL, Alexis Kougias never hid himself. «It was a match that was a monologue for 90 minutes. Normally, PAOK should have scored 15 goals which due to an amazing goalkeeper it did not. It was a matter of time for not just one goal to be scored. Xanthi was like a punching bag. It never reacted. It did not pursue anything. It was a team awaiting for its fate. If teams like Xanthi and Atromitos, teams that are not independent, make it to the playoffs, then it will be a one-man game. » Kougias said.

Karypidis: All of Greece knows

In the same spirit, spoke the president of Aris, a team that is pursuing a spot in the top six teams of the Greek Championships, a difficult task as some see it.
“All of Greece knows that there is a certain relationship [between the two teams]. This has a great impact to the Championship. The credibility of the Greek Championship is distorted obviously. Some play in a friendly manner and we are constantly at war with everyone – both Aris and Olympiacos, which have been targeted. Everything must come to light so that people can know what is going on. There are laws that must be enforced. What does the law say? It says that they should be downgraded. Minus six? Minus six. Whatever the law says. Now the law will be enforced and there is no one who can provide cover for them. I am certain that the law will be enforced.