Why Panos Kammenos is on edge, seeks to muzzle the press

The Independent Greeks party’s approach to the FYROM naming agreement has resulted in the party’s complete collapse in opinion polls (with about 1.5 percent). 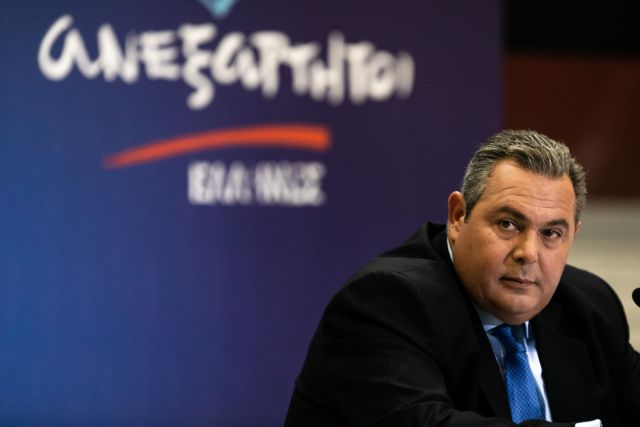 Defence Minister Panos Kammenos is on edge lately. A relatively “harmless” article brought on a lawsuit and the arrest of journalists, and dealt a serious blow to the government΄s image, as the impression internationally was that it does not respect the fundamental democratic principle of freedom of the press.

Suddenly, and for no real reason, as worse has been written about the defence minister and about funding for migrants that has been “lost”, the political scene is on fire.

The silence of the government, and the lack of any effort to support the defence minister, demonstrates that the PM’s office is up in arms over the publicity surrounding a case involving the arrest of journalists.

One may wonder why Panos Kammenos lately has been so agitated. One would think he would be happy after serving three-and-a-half years as minister, with the red carpet of the Greek Pentagon. He may be one of the longest-serving “Field Marshals”, and so he should be grateful to Alexis Tsipras (and himself, naturally) for the political career that life had in store for him.

The reason he is on edge is the FYROM naming agreement, as Prime Minister Zoran Zaev appears poised to win approval of the Greece-FYROM accord in a referendum on September 30. That terrifies Kammenos’ Independent Greeks part, which had speculated there was no way that the agreement would be passed in FYROM, because the citizens there would not accept the compromise.

On 12 June, Kammenos said that the agreement will not be passed in FYROM’s parliament, and he demanded a conference of Greek party leaders, convened by the President of the Republic, in order to change the 1992 decision of the same conference, which rejected any use of the name Macedonia by FYROM.

On 11 July, at the Nato summit, where Kammenos had to applaud Zoran Zaev, he said that the agreement will never be implemented because it could not gain approval either in the constitutional revision process in parliament, or in the referendum.

“They [FYROM officials] may collect invitations and be photographed, but they will not join Nato as long as they use the name Macedonia,” Kammenos was saying.

In response to a reporter’s question regarding the timing of the next general election, Kammenos replied, “As long as the FYROM agreement is not tabled in parliament, do not expect elections, which will be held at the end of the four-year term.”

All of the Independent Greeks’ statements were based on the presumption that the agreement would not pass in Skopje, and that FYROM will shoulder the burden of a collapse.

In the final stretch toward the referendum – and with international players who are exerting pressure, promising, and blackmailing – by all accounts the ‘Yes’ vote will prevail, albeit marginally. That will make it easier for Zaev to pass the constitutional amendments required by the agreement in the current parliament, without having to call an election to receive a fresh popular mandate.

Once all the steps by Skopje to meet the terms of the agreement have been taken, the clock starts ticking for Panos Kammenos.

Complete collapse
Already, their ridiculous approach of the Independent Greeks to the FYROM naming agreement has resulted in the party’s complete collapse in opinion polls (with about 1.5 percent). If nothing else, Panos Kammenos has the instinct of political survival. He knows that his end appears near, and that he must react in some manner.

His argument with Nikos Kotzias and his sudden meeting with PM Alexis Tsipras, where the time-frame of the Greek Parliament’s ratification of the agreement was discussed, indicate that tensions are high.

There is even more agitation over leaks that SYRIZA has prepared a plan to be implemented if the Independent Greeks pull out of the government, and that three of their MPs – Thanasis Papachristopoulos, Kostas Zouraris, and Elena Kountoura – will side with SYRIZA and abandon the Independent Greeks.

Panos Kammenos is on edge because his party literally disintegrated, both in the polls and on the level of cadres. Many have abandoned the party over the last months, as they wanted Kammenos to topple the government in order to block ratification of the naming accord in the Greek Parliament, and not to play power games geared toward his personal political survival.