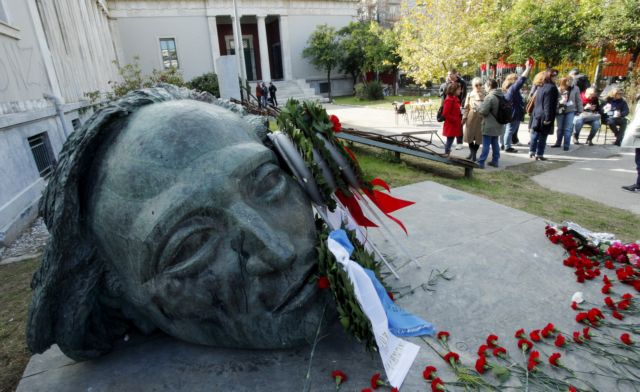 The Prime Minister Alexis Tsipras noted that “we hold onto the thread of the Polytechnic uprising and with it we create a new Greece” from the stand in Parliament.

“Nobody could have imagines a few months before the uprising that the Greek people would com face to face with the dictatorship. Since then, Greece has experienced the longest period of democratic normalcy in its modern history. Despite this, the demand for more democracy exists and will continue to exist” he further noted.

In concluding his statement on the uprising, the PM argued that it is the historic duty of the Greek people to fight now and not allow the world to return to isolationism and totalitarianism.

Theorodorakis: “Do not honor the uprising with wreathes and Molotov cocktails”

The head of the River Stavros Theodorakis stated that the uprising is not honored with wreathes, Molotov cocktails and looting. The opposition leader explained that honoring the uprising means addressing the youth’s demands for work, education and meritocracy.

During his statement Mr. Theodorakis slammed the government for the recent appointments at the Ministry of Education, while adding that the political parties are responsible for the tragic state of Greek universities.