Obama praises democracy in his legacy speech in Athens 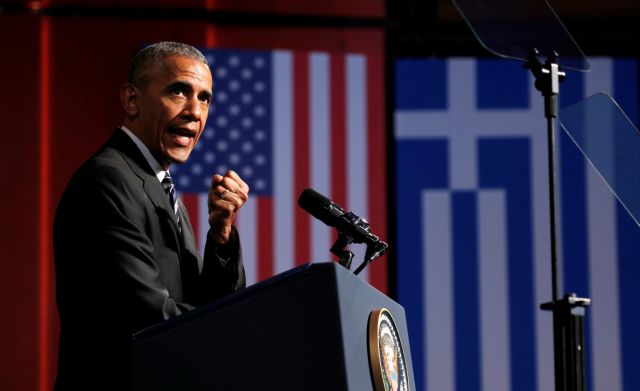 On Wednesday the US President Barack Obama delivered his legacy speech in the packed out Stavros Niarchos Foundation, following a visit to the Acropolis.

Speaking at the Stavros Niarchos Foundation Cultural Centre earlier in the day, Obama once again highlighted the need for Greece’s creditors to agree to debt relief, in accordance with the advice of the International Monetary Fund (IMF), noting that the country, and especially its young people, needed to see hope and a future.

“The IMF has said that debt relief will be crucial to get Greece back to growth. They are right. It is important because if reforms here are to be sustained, people here need to see hope and they need to see progress”. Young people, in particular, needed to know there is a future, there is education, and jobs that were worthy of their potential, he added. “You don’t have to travel overseas, you can put roots right here in your home, in Greece, and succeed. And I am confident that if you stay the course, as hard as it has been, Greece will see brighter days”, he said in a message to the country. The process of reform in Greece had been essential, Obama noted, since the country’s economy and debt had become unsustainable.

“In this global economy, investment and jobs flow to countries where governments are efficient, not bloated, where the rules are clear. To stay competitive, to attract investment that creates jobs, Greece had to start a reform process” he said. At the same time, he noted that these reforms had involved “extraordinary pain” and “tremendous sacrifices” by the Greek people, which the “world does not, perhaps, fully appreciate”. “Part of the purpose of my visit was to highlight for the world the important steps that had been taken here in Greece” Obama said, noting that the Greek budget was back in surplus and that Parliament had passed reforms to make the economy more competitive.

“I want to commend Prime Minister Tsipras for the very difficult reforms his government is pursuing to put the economy on a firmer footing” the U.S. president added, promising that Greece will continue to have the full support of the United States as it continues to work to put the economy on a stronger foundation. “I will continue to urge creditors to take the steps needed to put Greece on a path toward sustained economic recovery” he said.

The rest of Obama’s speech was devoted to challenges presented to democracies by an increasingly globalized world and the fears and tensions this generated. “How do we ensure that our diverse, multicultural, multi-racial, multi-religious world and our diverse nations uphold both the rights of individuals and a fundamental civil adherence to a common creed that binds us together. Democracy is simplest where everybody thinks alike, looks alike, eats the same food, worships the same god.

Democracy becomes more difficult when there are people coming from a variety of backgrounds and trying to live together” he pointed out. In the information age, he added, the unprecedented exchange of information could also accentuate differences or seem to threaten cherished ways of life.

“Faced with this new reality, where cultures clash, it is inevitable that some will seek a comfort in nationalism or tribe or ethnicity or sect” Obama said. At the same time, widening inequality had led to “a growing suspicion or even disdain for elites and institutions that seem remote from the daily lives of ordinary people”. The answer according to Obama were an “inclusive political and cultural strategy” and governments that were more open, more efficient and more effective in responding to the daily needs of citizens.

“People have to know that they are being heard” he emphasized, noting that this was also one of the challenges now facing Europe. “The world needs a Europe that is strong and prosperous and democratic. But, all institutions in Europe have to ask themselves how can we make sure that people in individual countries feel that their voices are still being heard, that their identities are being affirmed, that the decisions that are being made that will have a critical impact on their lives are not so remote that they have no ability to impact them” Obama said. Obama also stressed the need for people to be engaged in politics.

Quoting Martin Luther King’s saying “the arc of the moral universe is long but it bends toward justice” he noted that this happened “because there will be people, generation after generation, who have the vision, the courage and the will to bend the arc of our lives in the direction of a better future”. Democracy allowed people to do just that, he said. “In every corner of the world I have met people who in their daily lives demonstrate that, despite differences of race or religion or creed or color we have the capacity to see each other in ourselves. Like the woman here in Greece who said, of the refugees arriving on these shores, ‘we live under the same sun, we fall in love under the same moon, we are all human. We have to help these people’. Women like that give me hope” he said.

“In all of our communities, in all of our countries, I believe there is more of what Greeks call ‘philotimo’. Love and respect and kindness for family and community and country and a sense that we are all in this together, with obligations to each other. ‘Philotimo’: I see it every day and that gives me hope” he added.

A full transcript of the outgoing US President’s speech is available online.