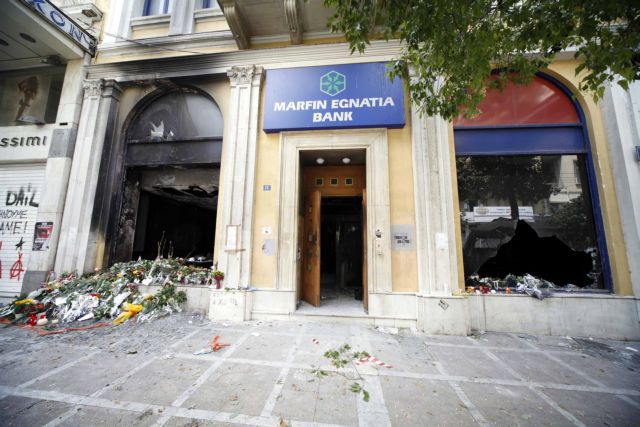 The courts of Athens unanimously acquitted the two main suspects in the firebombing of the Marfin offices in downtown Athens, during a major demonstration in 2010.

According to the court ruling, Theodoros Sipsas was present in the major demonstration, however there is no serious or plausible indication that he was involved in the firebombing. During the trial it was also demonstrated that the other suspect, Pavlos Andreadis was not even present in the demonstration. Both were implicated in the case from an anonymous letter that was sent to the authorities, however during the trial not a single witness could identify the two suspects.

Three of the bank employees were trapped inside the bank during the attacks, Paraskevi Zoulia, Epaminondas Tsakalis and Angeliki Papathanasopoulou (who was pregnant at the time) and lost their lives. In July 2013 the courts found three Marfin employees guilty of gross negligence that resulted in the deaths. Specifically Marfin’s managing consultant Konstantinos Vasilakopoulos, the building’s head of security Emmanuel Velonakis and branch manager Anna Vakalopoulou were found guilty for manslaughter.

The courts held that the defendants had not taken any precautions or established any evacuation plans in the event of an arson attack. Additionally the defendants did not attempt to evacuate the building despite being unprotected and all other banks in the area not operating on the day.