The open-air producers and retailers are continuing their strike with a protest at Kanigos Square in down town Athens, to demonstrate against the Ministry… 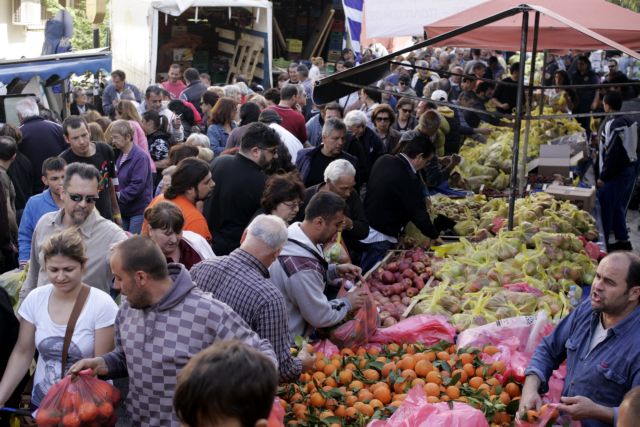 The open-air producers and retailers are continuing their strike with a protest at Kanigos Square in down town Athens, to demonstrate against the Ministry of Growth’s draft bill affecting their sector. The demonstrators will then march to Parliament, where the controversial bill is currently being discussed.

The protesters have declared that they are prepared to carry on with the struggle and protest actions all over the country and announced that they will distribute free fruit and vegetables on Salaminos Streets in the Perissos area of Athens.

DIMAR leader Fotis Kouvelis met the presidents of the federations of open-air market producers and retails and has requested that the controversial bill be withdrawn. The leader of SYRIZA Alexis Tsipras has also made a similar request.

The president of the open-air market producer federation Vasilis Makridis announced that after receiving thousands of phone calls from consumers, the open-air markets in Central and Western Macedonia, Thessaly and Thrace will operate on Saturday as an exception, with the strike resuming on Monday.

The Growth Ministry’s bill includes a number of controversial provisions which the protests believe will deregulate and bring chaos to their sector, such as setting limitations on the number of participants in the open-air markets, segregating producers from retailers, increasing fines and further complicating the permit process.